SPIRIT OF THE LITURGY: COMMEMORATIVE EDITION 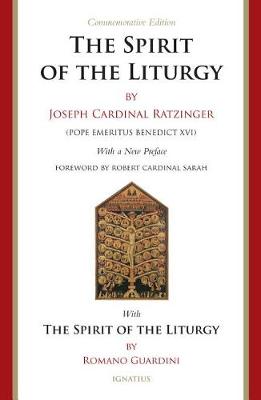 In honour of its fortieth anniversary (1978-2018), Ignatius Press presents a special Commemorative Edition of one of the most important works written by Joseph Ratzinger: The Spirit of the Liturgy.

This edition includes the earlier classic work with the same title by Servant of God Romano Guardini, a book that helped Ratzinger to "rediscover the liturgy in all its beauty, hidden wealth and time-transcending grandeur, to see it as the animating centre of the Church, the very centre of Christian life".

Considered by Ratzinger devotees as his greatest work on the liturgy, this profound and beautifully written treatment of the "great prayer of the Church" will help readers to deepen their understanding of the rites of the Church. The cardinal discusses fundamental misunderstandings of the Second Vatican Council's intentions for liturgical renewal, especially about the priest's orientation of prayer to the Father, the placement of the tabernacle in churches, and the posture of kneeling.

Other important topics are the essence of worship; the Jewish roots of Christian prayer; the relationship of the liturgy to time and space; sacred art and music; and the active participation of the faithful in the Mass.

Robert Cardinal Sarah was born in Guinea, West Africa. Made an Archbishop by Pope John Paul II and a Cardinal by Pope Benedict XVI, he was named the Prefect of the Congregation for Divine Worship and the Discipline of the Sacraments by Pope Francis in 2014.