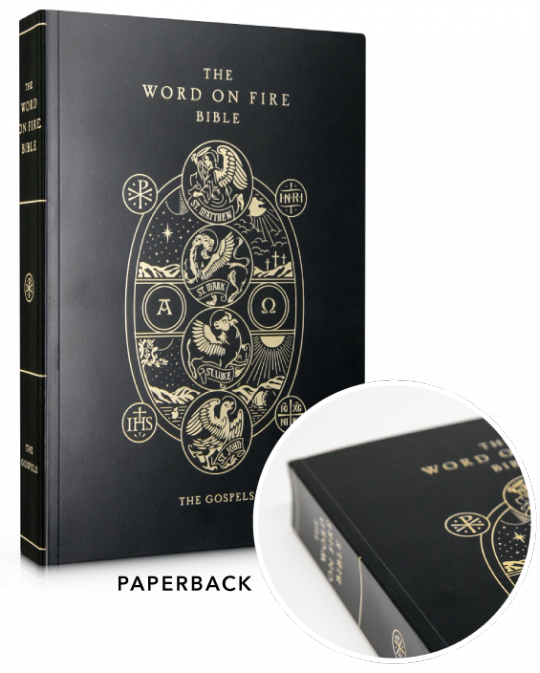 Each edition of The Word on Fire Bible: The Gospels features text in a 9pt font, which is larger than in most other Bibles, with significant line spacing to allow for an easier reading experience.

Four years in the making, The Word on Fire Bible is a ground-breaking new series introducing readers to the strange, colourful world of the Bible.

It was designed to appeal not just to Christians but to non-believers, searchers, and those with far more questions than answers. It doesn't presume any experience with the Bible, catering to those unfamiliar with its many events and characters, while still providing rich insights to even the most biblically literate.

It's a cathedral in print, the highest-quality Catholic Bible ever produced for mass distribution.

Inside this first volume of the series, you'll find the four Gospels surrounded by illuminating artwork and helpful commentary from Bishop Robert Barron, the Church Fathers, and some of the greatest saints, mystics, artists, and scholars throughout history, allowing the story of Jesus Christ to shine with new clarity and splendour.

The translation used in The Word on Fire Bible is the New Revised Standard Version: Catholic Edition (NRSV-CE), which has received wide acclaim from academics and Church leaders. It stands out because of its accuracy and readability, being as literal as possible yet as free as necessary to make the meaning clear in graceful, understandable English. It’s a wonderful translation—both for those who have never read the Bible and for those who have studied it for years.