THE MYSTICISM OF ST PAUL 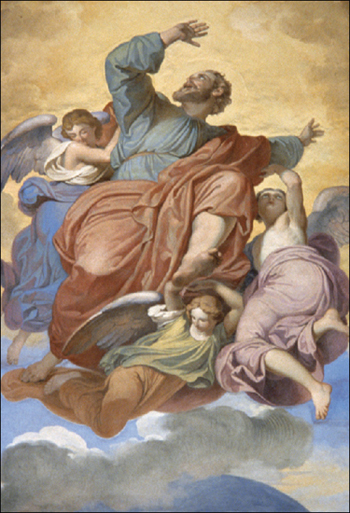 The Mysticism of St Paul

are being transformed into his image, from one level of glory

to the next, and this comes from the Lord, who is the Spirit.

The fresco Paul, Taken Up to Heaven visualizes what Paul attempts to explain about an extraordinary mystical experience. The fresco is in the Basilica of St. Paul Outside the Walls in Rome, where the Apostle’s tomb is located. This work of Francesco Coghetti (1802-1875), is among thirty-six frescoes chronicling the life of the great Apostle. Twenty-two artists were commissioned by Pope Pius IX to paint these frescoes in 1857 for the new basilica. The previous basilica, destroyed by fire on the night of July 15, 1823, had been adorned with mosaic  images  of  the  life  of  Paul  created  by  Pietro  Cavallini  (ca. 1250–1330).

In the foreground of Coghetti’s striking fresco, cumulus clouds allude to the heavens, and an angel, whose clothing serves as a vehicle, transports Paul upward while the Apostle is supported on either side by two other angels. Paul’s body is massive in scale compared to the figures of the angels; his arms and legs seem to be everywhere, looking a bit awkward and chaotic. He has suddenly been lifted up by the Divine. His body is thrown back by an invisible force that simultaneously pushes and pulls him toward a presence outside the dimensions of the painting, but which is personified by the brilliant aura lighting up the sky. Paul’s eyes are transfixed by an attractive presence that leaves him in awe, while his mouth opens spontaneously in exhilaration.

Writing to the Philippians, Paul declares that he has been grasped by Christ (cf. Phil 3:12), as if Christ had physically captured him by surprise. It is this “assault” that Coghetti seems to be alluding to in his fresco. Paul appears to have been literally plucked out of his surroundings to see and hear things he cannot comprehend intellectually but that influenced his life. The Apostle shares with the Corinthian church his mystical experience by speaking in the third person: “I know a man in Christ who fourteen years ago was caught up to the Third Heaven— whether in the body or out of the body I don’t know, God knows. And I know that this man . . .  was caught up in Paradise where he heard things too sacred to put into words, things which no man may utter” (2 Cor 12:2–4). Because Paul is vague, it is difficult to assess what really happened to him; however, this ambiguity is a component of the divine experience.

What or whom does Paul see or hear? In presenting the events of his conversion, and the mystical narration of his experience with the divine in the heavens, artists typically communicate the revelation through the use of brilliant light. The response of the person receiving the revelation is usually depicted as astonishment or fear followed by silence. This is equally true in biblical narratives of celestial manifestations (cf. Lk 24:1–5; Mk 16:5–6; Mt 17:2–8). This painting further reveals another connection between Paul’s vision on the road to Damascus and the experience of being elevated to heaven. In the former event Paul is “brought down,” thrown to the ground, a humbling occurrence that leaves him unable to see for several days. It is a revelatory moment that Paul is later able to recount with great clarity and detail. Then we have the marvel of Paul being “taken up,” “caught up to the third heaven,” which he is unable to give voice to or ever fully explain. In fact, he mentions the mystical experience only once to the Corinthian Christians (cf. 2 Cor 12:3–4). There is a difference between the two experiences: the Damascus encounter with the Divine is for the sake of Paul’s mission and therefore for the good of the community, the Church. Of this Paul speaks openly and often. The second revelatory encounter with the Divine is for Paul himself, a personal gift from a gratuitous God. And because it is such, Paul never gives details of the event, perhaps content to keep it private. Certainly it must have been a tremendous consolation and personal encouragement for his life and mission.

According to saints who have been similarly gifted, in a mystical encounter one’s senses and faculties, such as memory, are completely absorbed in God, so much so that external realities become trivial and non-consequential. St. Teresa of Avila, another great mystic, clarifies for us Paul’s experience with her own: She writes about the consolation, the sweetness, and the delight of prayer.

. . . The soul becomes conscious that it is fainting almost completely away, in a kind of swoon, with exceeding great and sweet delight.

The soul that has experienced this prayer and this union is left with a very great tenderness, of such a kind that it would gladly become consumed, not with pain but tears of joy.

. . . At this stage it would want to be all tongues so as to praise the Lord.

As Paul explains, the life of the Spirit that animated Christ animates us, making us children of God: “God has sent the Spirit of His Son into our hearts, to cry, ‘Abba, Father!’ ” (Gal 4:6). Thus, all that we do and are springs from the inner reality: “we’re God’s children. And if we’re  children, then  we’re  also  heirs— heirs  of  God, co-heirs  with Christ, if we suffer with him so as to be glorified with him as well” (Rom 8:16–17). Far from being a static reality, this life of God, through Christ, in the Spirit, pulses and grows within us.

As we grow in this life and in intimacy with Christ, it becomes a union in which two hearts beat as one. Our desires are Christ’s desires, and his will is our will. Paul bends his knees in prayer to the Father, praying that this relationship will be realized in his followers:

May Christ dwell in your hearts through faith, firmly rooted and established in love, so that with all the saints you may be able to understand the breadth, the length, the height, and the depth, and know Christ’s love which surpasses all knowledge so that you may be filled with all God’s fullness. (Eph 3:17–19)

This is what we long for, but how do we reach this union, and how do we live it every day? How do we integrate what we desire with the concreteness of daily life with its many choices? The masters of the spiritual life speak of growth in terms of stages, or movements, to reach this intimacy.

Blessed James Alberione concretized this spiritual journey in relation to the Trinity. In the first movement, the heavenly Father presents Jesus to us. At this stage we come to know Jesus, desiring to be like him. We gaze upon Jesus the Master and are drawn into him with an attraction that is at once inviting and engaging. Confronting our life with God’s Word, we question ourselves: “Whom or what do you seek, my heart?” Or as Paul would say:

If you’ve been raised with Christ, seek the things that are above, where Christ is . . .  think about the things that are above . . .  for you’ve died and your life is hidden with Christ in God . . . [A]s God’s chosen ones, holy and beloved, clothe yourselves with true compassion, kindness, humility, gentleness, patience.... Whatever you do, whether in word or deed, do it all in the name of Jesus Christ the Lord, and give thanks to God the Father through him. (Col 3:1–3, 12, 17)

In the second movement, knowledge of Christ gives way to seeing ourselves and everything else with the eyes of our heart, recognizing that Jesus is our only Master. Other infatuations and fascinations must disappear, because our choice is for Christ. At this stage, we find all our joy, our happiness, our delightful “taste” only in Jesus.

“. . . [C]onsider everything to be loss for the sake of the surpassing greatness of knowing Christ Jesus my Lord” (Phil 3:8).

The third and final stage represents ultimate union with God; it means being able to say with St. Paul, “I am alive, but it’s Christ living in me,” or, to put in another way, “For me to live is Christ” (cf. Gal 2:20) At this stage, no personal effort is involved on our part. We allow the Spirit to work until Jesus is formed in us. It is the Spirit who brings this about.