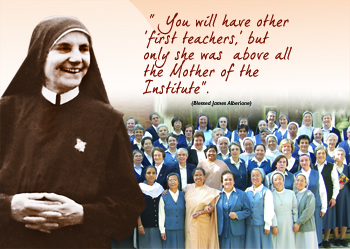 There are things one does not really consider when looking at the first years of a new religious congregation. Certain things are obvious: the primary way of relating to Jesus Christ; the expression of service that is characteristic of the community; the rhythm of prayer and the "style" of community life. Other things come later, and ordinarily conform to general customs. It was customary 100 years ago, for example, to refer to the superior of a community of religious sisters as "Reverend Mother."

Alberione would not have it so. Since everything in the Pauline Family was centered in Jesus, the Divine Master, he wanted even the details to refer in some explicit way to Christ. The bishop, a Dominican tertiary, suggested the Dominican practice: their superiors are given the title "Master" as an expression of their charism as teachers. Whereas the Dominican's Superior General went by the title "Master General" ("general" signifying "overall," not in a military sense),  Alberione, the bishop proposed, could be "Primo Maestro," the "first" or top-ranking teacher. Alberione concurred: to use the title "Maestro" would be a continual reference to Jesus, the Master. And since the members of the first two congregations were to be both disciples and teachers, he wanted that reflected in the community's language. He spoke of the brothers of the Society of St Paul as "disciples" (and this language continues, informally, today). Among the Daughters of St Paul, the first sisters were told to replace the title "sister" with "Maestra" (teacher), as a continual confirmation that theirs was a teaching mission, even if not conducted in the more customary way of the classroom.

Appointing Teresa Merlo as the first superior of the new congregation, Alberione gave her both a new name and a new title. She would be called "Thecla" after the popular woman disciple of St Paul, and she would be referred to as the "Prima Maestra": not so much a "Mother General" as a "first" or "foremost" teacher, representing Jesus the Master. He expected the title to continue through the generations, simply a characteristic of the Daughters of St Paul. At Thecla's funeral, he said, "You will have other 'Prima Maestras,' but only she was, above all, the Mother of the Institute." Alberione did not recognize that in her 50 years of service as "Prima Maestra," Merlo had defined the role in a unique and unrepeatable way. The community members had long adopted the more common title of "Sister" over the earlier "Maestra" (characteristic of the Italian practice of identifying persons with an honorific based on their profession); Merlo's immediate successor preferred to be spoken of simply as "Sister Ignazia."

While the Daughters of St Paul have had many excellent "teachers" in the spirit of St Paul, they had only one "Prima Maestra," Thecla Merlo.