THE DEATH OF JESUS AS A SACRIFICE 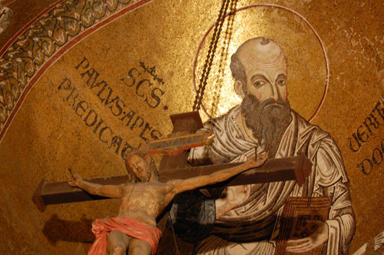 The Death of Jesus as a Sacrifice

The French writer René Girard has given the best explanation of the origins of sacrifice. Almost all human conflict is the result of people modelling themselves (albeit unconsciously) on others and then entering into rivalry with others. All human conflict is about desiring what others desire–money, land, prestige, a spouse, a friend, power, etc. Every human society is threatened by this desire which becomes rivalry which leads to conflict. Developed societies have quite sophisticated mechanisms for keeping this from getting out of hand. In a society with no police force and no judiciary the basic mechanism to stop this internal violence is scapegoating and sacrifice. A group achieves initial unity by falling on a scapegoat and uniting against him and killing (or expelling) him. Because internal tensions disappear when this mechanism kicks in, the scapegoat seems to establish peace, giving the whole process an air of holiness—and inaugurating human sacrifice (in time substituted by animal sacrifices). The purpose of sacrifice, anthropologically, is to make peace by channelling all the latent violence of the community onto one victim.

The whole of the New Testament bears witness that Christ’s death is sacrificial, but few theological ideas have been more misunderstood.

For many the idea is that God was infinitely offended by human sin, no sacrifice could equal that offence, so the son of God is offered to an angry father as the only thing that can satisfy him. Two problems. One is the concept of a God who demands the blood of the innocent—dangerously close to pagan ideas of bloodthirsty gods. A god like this is not the Christian God, but the Aztec one. The other problem with this understanding of redemptive sacfrifice is is that in Romans 3:24-25 Paul wrote about how people are saved: they are justified by his grace as a gift, through the redemption which is in Christ Jesus, whom God put forward as an expiation by his blood, to be received by faith. This was to show God's righteousness. God provides the sacrifice. In pagan thought humans appeased the god with sacrifice. The Old Testament is already several steps ahead of this: in Jewish Temple worship (from which Paul’s imagery comes) it is never God who is appeased; the point of an atoning sacrifice is to wipe away human sin. The image is not of God as an angry opponent having to be entreated or cajoled, but of God, the injured partner, actively seeking reconciliation with the offender(s).

The great difference between the sacrifice of Jesus and all others is this: All “normal” religious sacrifice, including Jewish sacrifice, involved making peace by someone doing violence to some other living thing – human or animal. Christ offers his sacrifice not by doing violence but by allowing violence to be done to him. (Some modern thinkers have maintained that the difference between the two is so great that the death of Christ cannot properly be called a sacrifice. We nevertheless maintain the New Testament vocabulary.)

In all ancient cultures it was assumed that God “approved” of the sacrifice, was “on the side” of the sacrificing group and against the victim. One of the Bible’s greatest insights is that God in fact takes the opposite position: he on the side of the victim, not the victimisers. This truth is articulated most clearly in the Old Testament in the Suffering Servant song (please read it – Isa. 52:13-53:12). The Cross makes this crystal clear. The Cross of Christ is God’s declaration of where he stands. Traditionally the idea has been that we humans have to offer a victim to an angry God in order to appease him. In Christ it is reversed, a loving God offers himself to an angry humanity to show them what they are doing and in so doing the whole mechanism is revealed and robbed of its power.

The idea of an angry God who needs appeasing is alive and well in our parishes and when it is challenged people can get very upset. Think of ways in which you can help people to understand what we mean by “the sacrifice of the cross”, without falling into the trap of preaching a bloodthirsty God.