THE BIBLE AS PAUL KNEW IT 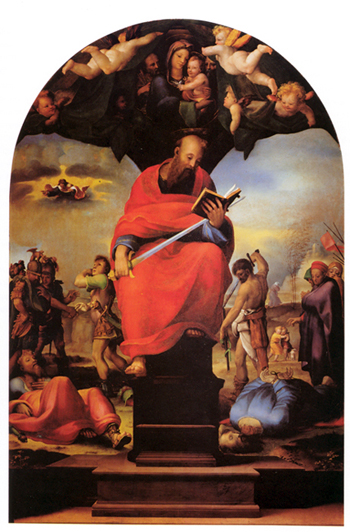 The Bible as Paul Knew It

If there's any one person identified with the Bible (outside of Jesus himself), it would have to be Paul. Here is a man who wrote about a third of the New Testament, making him one of the most prolific authors in the history of Divine Revelation. But Paul's relationship to the Bible isn't only that of an author.

When we Catholics think of the Bible, we look at it as a collection of books clearly divided into two major volumes: Old Testament, New Testament. But Paul didn't have that big book we call the Bible. He did, however, know of a collection of sacred texts in three parts: Law, Prophets and Writings. These he knew very well, indeed, even though there was no "fixed list" of inspired books in Paul's time. Paul was deeply familiar with the Greek translation of the Hebrew scriptures, which he quoted almost 90 times, in addition to many simple allusions or references. We also find things in Paul's writings that are nowhere else in the Bible: rabbinic traditions and stories that were told as a form of interpretation. In Paul's day, the overall theme of the Bible was understood as saying that history had a goal, and that the people of Israel played a pivotal role in bringing it about. It was only natural to use dramatic language and imagery to present this universal turning point. We call that imagery "apocalyptic," and tend to relegate it to talk of "end times" or the Last Judgment or the end of the world. Actually, it had less to do with the "end" of history than with the "center" of history: the fullness of time.

Pre-Damascus Saul, like many devout Jews today, was convinced that observance of the Torah would help hasten this moment. Once he was converted to Jesus, Paul identified the Resurrection as the turning point of universal history. And he began to read the Law, Prophets and Writings in a very different light. The center of history was not in an undefined future: God had already acted definitively and dramatically in the midst of the Chosen People. Paul was especially struck by the prophet Isaiah (one of the Scriptural books he cites the most often). Isaiah was the prophet of the gospel (that is the word used in the Greek translation of Isaiah). That "good news" was that Israel would see a "new creation" and become a "light to the Gentiles" and a "means of salvation to the ends of the earth." In Isaiah, "gospel" meant the news about the return of Israel from exile: release from captivity to entrance into God's definitive reign, where God would truly be Lord of everything that exists. In other words, God's kingdom would spread across the globe, beginning at Jerusalem. Because God's plan was to save the whole world.

Paul began to see the whole story of Israel as a vast outline of human history, but with one part still unfulfilled. Paul wholeheartedly accepted the mission of "preaching to the Gentiles the unfathomable riches of Christ" (Ephesians 3:8) because he knew from the prophet Isaiah that this was the next phase in God's plan for the world. The exile had ended because Jesus, who was Israel in person, had risen from death, the ultimate exile, and was seated at the right hand of God, the ultimate homeland.

So Paul began "preaching the faith he had tried to destroy” (Galatians 1:23): he began "proclaiming the Gospel of God" (Mark 1:14). But Paul, who talked and wrote so much about the Gospel, never read the Gospels! Paul's letters show a deep familiarity with the story of Jesus' suffering, crucifixion and death. This was the focus of his prayer as well as his preaching. When Paul  wrote to Timothy, "Get the books I left in Troas...especially the parchments" (2 Timothy 4:13), perhaps among those treasured books was a carefully copied list of the sayings of Jesus, or maybe the story of his arrest, trial and crucifixion, things that Scripture scholars believe were the first parts of the Gospel to be written. Paul  hardly ever  mentions the Lord's public life, but  he does refer to things the Lord "commanded" or "decreed." There are some hints of what we would call quotations from the Gospels, except that the Gospels would not be in the form we know them until after Paul's death. This makes Paul the first one to set the teachings of Jesus' public life in the written form we have today.

Paul's great knowledge of the Word of God to the people Israel shaped him as an interpreter of God's amazing action in Christ. It was as a man who read and prayed with the Scriptures that Paul was prepared to contribute to them himself.