SAUL OF TARSUS BEFORE DAMASCUS 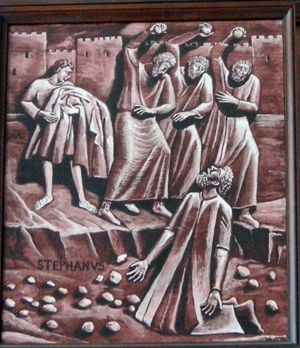 Saul of Tarsus before Damascus

St. Paul is one of the best-known personalities of the ancient world—the historian's dream come true. Not only do we have some of his own letters, we also have an account of his life’s work in the Acts of the Apostles (attributed to St. Luke). Paul is referred to in other ancient writings within 50 years of his death, and by that point his own letters had been copied and distributed so far and wide that he would have been amazed. Because of this, we have a better idea of Paul's life than we do of many major figures of the Roman Empire. We certainly know more about Paul than we do, humanly speaking, about Jesus, who left no personal writings at all.

From these historical sources, we learn that Paul was born in Tarsus in the Roman province called "Syria and Cilicia." Tarsus was a noteworthy city of that province, a free city, renowned for its schools. The ancient Greek geographer Strabo called its citizens "an admirable, intelligent and industrious people." Dio Cassius, a third-century Roman historian, had a different opinion: he called Tarsans "the worst of races." In Paul's lifetime, Tarsus was a major city with a population of about 300,000. It was a commercial crossroads between a good harbor and the only land route through the mountains, famous as the scene of Cleopatra's glamorous visit to Antony. This, then, is where a boy-child was born in 8 or 9 AD, into an observant Jewish family of the tribe of Benjamin, and named for King Saul, that tribe's most famous son.

According to the Acts of the Apostles, Paul was born a Roman citizen and played the citizenship card to his advantage at strategic points. Paul does not mention this at all in his writings—but then, he steadfastly refused to boast of human distinctions. It would have been out of character for the Apostle to flaunt the prestige of citizenship when writing to communities where the majority were poor, "low-born" and slaves. Scholars say that the way Paul addressed his letters shows he thought in Roman geographic terms. So we are on solid ground in accepting that Paul was indeed a citizen of the Empire.

Although Paul's native Tarsus was a center of learning, he was educated in Pharisaic Judaism in the "school" of Gamaliel in Jerusalem. For a first-century Jew to study Torah under Gamaliel would be akin to a medieval Christian getting theology lessons from Thomas Aquinas. But Saul the persecutor did not show himself to be a particularly docile student of the broad-minded Gamaliel, who traveled outside of the Holy Land and maintained contacts among the Gentiles. Paul's letters do not breathe a word about Gamaliel. Was Luke was gilding the lily, associating his hero with the greatest teacher in the history of Israel? Or was Paul, according to his usual principles, refusing to be a name-dropper? Paul's writings show that he knew the Greek Bible inside and out, and that he used rabbinical methods of exegesis. He had to learn it somewhere.

Finally, according to testimony repeated throughout the Letters, the young Saul of Tarsus was scrupulously and successfully observant of all the regulations of the Jewish Law as practiced by the Pharisees. Filled with zeal for the traditions handed down from generation to generation, Saul fully intended to force other children of Abraham to be just as faithful as he himself was, especially in the face of a pernicious teaching that was spreading across the land by people like Stephen the "deacon." Saul would do everything in his power to see those false teachers destroyed. What power on earth could stop him?

The Stoning of St Stephen panel from the Pauline Door, Basilica of St Paul-Outside-the-Walls, Rome. Photo by Sergia Ballini, FSP.