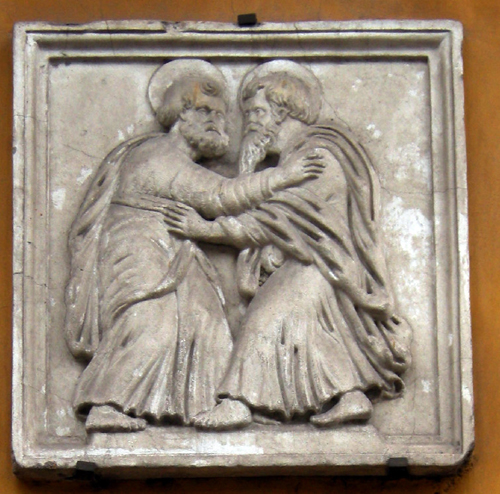 Peter and Paul: The two Apostles are considered the "founders" of the Church of Rome, even though neither Apostle was the first to bring the Gospel to the Eternal City. And their names have been linked with a shared feast since the year 258, when their bodies were moved (the technical term is "translated") to keep them from being profaned during the persecution of the Emperor Valerian.

Paired images of Peter and Paul are a whole genre of art in themselves. The artistic canon for Peter gives him a stocky build, with bushy gray hair (perhaps a tuft near the forehead of an otherwise balding head) and a full, curly beard. When he is depicted with Paul, Peter, keys in hand, is almost always on the viewer's left. Imagine Jesus standing between the two: Peter, his "vicar," will be on Jesus' right; Paul on his left. This is typically the case, whether the images are statues placed on opposite sides of a Church (for instance, St. Peter's Basilica at the Vatican), icons, or classic paintings of the two Apostles.

Early Christian novels presented Peter and Paul as boldly proclaiming the Gospel side by side--even to Nero! And when they were condemned to die, even death could not truly separate them. Visitors to Rome's Mamartine Prison will find there an inscription claiming that the Apostles Peter and Paul were chained together to a column there before being led to their respective deaths. The connection of Peter and Paul in their martyrdom comes to us from numerous sources. In the early 300's, the Church historian Eusebius wrote, "It is recorded that Paul was beheaded in Rome itself, and Peter likewise was crucified during the reign [of Nero]. The account is confirmed by the names of Peter and Paul in the cemeteries there, which remain to the present time..." Peter and Paul did not establish the Church of Rome in its historical dimension: instead, by martyrdom, they established the Church in their own blood.

Although historians believe that Peter may have been martyred as early as 64 A.D. (the year of Rome's famous fire) and Paul as late as 67, Christian tradition insists that they died on the same day. This was a way of keeping the two Apostles forever united in our memory. This tradition, in its turn, influenced a sub-genre of art featuring their final kiss of peace. The "last embrace of Peter and Paul" was said to have taken place on the Ostian Way, roughly two miles from Aquae Salviae, the place of Paul's martyrdom. (A chapel once stood at the site; now only a commemorative plaque remains.)

Artwork of the "last embrace"  finds its complement in twin depictions of the martyrdoms of Peter and Paul. Perhaps the greatest of these is masterful Stefaneschi triptych by Giotto: in a central panel, Christ sits enthroned in glory, while on his right (of course!) Peter is shown crucified upside down, and on his left, Paul is beheaded. (As a citizen of Rome, Paul was spared the humiliation and torture of crucifixion.)

Although Paul wrote frankly about a public disagreement with Peter, Christian art and literature have firmly and consistently kept the two together. The keys of Peter and the faith of Paul continue to guard and guide us in the truth of the Gospel.

Anne Flanagan, FSP, is a member of the Daughters of St Paul and a specialist in social media.

This plaque is found on Rome's Via Ostiense, at a site marked as the location of Peter and Paul's final farewell on earth. According to tradition, the apostles were separated at this point and led to their respective martyrdoms: Paul at the nearby "Aquae Salviae" and Peter at the Vatican. (Photo by Sergia Ballini, FSP.)