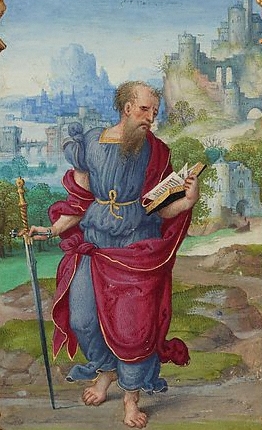 God’s action of reconciling the world to himself through the death and resurrection of his Son Jesus Christ is the source of ethical motivation for Paul. With this act, God freely bestows on us our true identity. We are no longer slaves of sin but children of God. It is from this sonship and daughterhood that our behavior must flow. God’s grace empowers us to act according to this new identity.

Pauline ethic may be summarized in three simple, yet loaded words: Identity informs behavior. In other words, what one externalizes in action must flow from the interior conviction of who one is. It is an appeal to become in one’s character and conduct what God’s action in Christ has made a person to be. This appeal implies two things— first, a person is morally obliged to work for a clear, honest and profound knowledge of self; and second, one is to make a sincere effort, in response to God’s grace, to align one’s actions with what one discovers to be his/her true identity. This is integrality in the Pauline sense.

Paul’s ethical appeal is not tied to a particular time and culture, but remains relevant for all ages and situations—even for us today. Responding to this appeal is an ongoing work of a lifetime.

Identity is a complex matter. It is like a series of layers piled one on top of the other. The most fundamental layer is our identity as created beings. We are not the author of ourselves. We are mere creatures. Debates about the death penalty, the hideous crime of abortion, experiments in genetic engineering aimed at producing genetically superior human beings through unnatural means, the senseless and irresponsible destruction of our environment…they all boil down to a failure to recognize that we are only stewards and not masters of the created order. These are cases in which identity fails to inform behavior.

Our faith confession is a further layer of our complex identity. Statistics even from some nations that are predominantly Christian witness to destructive division that blocks progress, selfish interests, indifference to the poor, the cult of personality (both in show business and politics): an environment that easily leads us to speak, act and vote in ways that compromise Christian values and principles. Our Christian identity fails to inform behavior.

The layer that comes next is vocational identity—Called by God, priests, religious and married people have a common calling to witness to God’s fidelity. But today there is an undeniable crisis of commitment, be it among the married, the clergy or religious. Marital infidelity is on the rise, while sex scandals among the clergy saturate the media. All these expose a weakness of vocational identity that could not sustain a coherent behavior.

“The unexamined life is not worth living,” said the Greek philosopher Socrates. Unless we are in touch with our identity and are able to own it, it cannot motivate us to act. Paul tells us that Christ has transported us from the realm of sin to the realm of God by paying the ransom with his own blood. We have been given the spirit of adoption. When we cry “Abba! Father!” it is that very Spirit bearing witness with our spirit that we are children of God (cf. Rom 8:15-16).

Are we convinced of this? The urgent task and challenge ahead of us is to grow in our consciousness of this identity. Only when we have claimed it as our own, can it empower us to act in a way that would prove the truth in the saying, “like Father like children.”