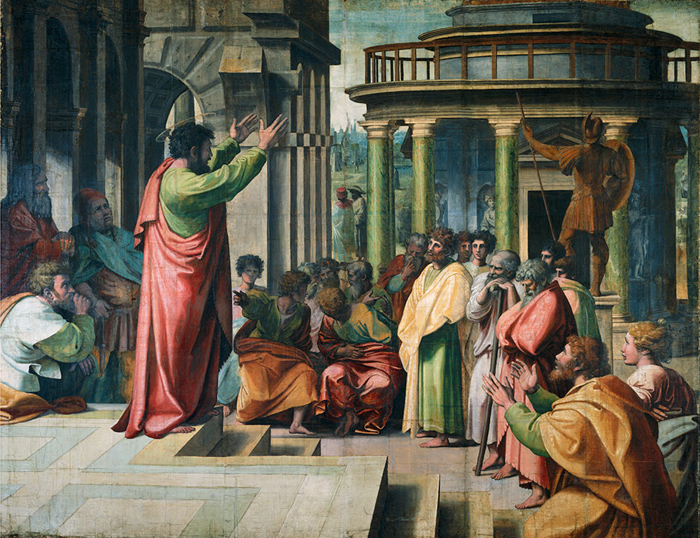 Such was our affection for you that we were prepared

to share with you not only God ’s good news

but even our very selves, so dear had you become to us . . .

[Y]ou also know how, like a father with his own children,

we exhorted you, encouraged you, and urged you to

conduct yourselves in a manner worthy of God. ...

The work St. Paul Preaching at Athens belongs to Raphael Sanzio (1483–1520), an artist usually known by his first name alone. This painting, done around 1515, may at first seem like an odd choice when discussing Paul’s parental role. After all, the Apostle’s mission at Athens (cf. Acts 17:16–34) met with indifference on the part of most of his hearers. How could a mission ending in apparent failure give us any insight into Paul as father, nurturer, guide? And yet precisely under such conditions, this work of Raphael shows Paul at his parental best, patiently engaging in the process of religious formation. Like a concerned father or mother, Paul tries to meet these “children” on their own level, adapting his message in a way they will best understand while encouraging them in a journey toward acceptance of and maturation in Christ.

In the painting we see Raphael’s interpretation of Paul speaking at the Areopagus, a place of philosophical debate in Athens. Paul stands fearlessly, for his goal is to preach the Gospel. To those who hear and accept, new life is assured in Christ Jesus. Surrounded by solid columns of Roman architecture, which allude to the power and permanence of the empire and its ideologies, Paul proclaims something new: “[A]nyone who’s in Christ is a new creation . . . ” (2 Cor 5:17). The Apostle’s uncompromising zeal and passion for the Gospel are reflected in his posture.

Although the source of light in this painting comes from behind Paul, illuminating his back, he casts no shadow on the crowd; Paul does not block the light but serves as a “light for the Gentiles” (cf. Isa 49:6, Acts 26:17–18). Paul stands at the very edge of the step with both arms raised high in entreaty. His earnestness conveys his fatherly affection and concern. We can almost hear him repeat the words he had earlier addressed to the Corinthians, “For though you may have innumerable guides in Christ, you don’t have numerous fathers— I was the one who begot you in Christ Jesus through the good news” (1 Cor 4:15).

The crowd appears to be attending to Paul and is engaged in what he is saying. In this painting Raphael has captured a mixture of reactions among the audience. Various expressions reflect attitudes of listening, pondering, skepticism, combativeness, discernment, and acceptance — characteristic responses in any formative encounter.

Paul’s raised arms are mirrored by one of his listeners at the bottom right. Paul is in the act of imparting wisdom by communicating Christ; the other man is in the act of receiving the word preached. To this man’s right are two other men, one with folded arms and one leaning with both hands on a walking stick. Both gestures suggest they are settling in for a long rhetorical debate. In contrast to those in the group who stand, assenting in faith to Paul’s preaching, the skeptics sit and feign shock, engaging in dramatics and seemingly trying to disrupt Paul’s preaching. Paul is not disturbed by this behavior; he realizes how challenging his words might be to some people.

Every parent must be prepared to deal with a child’s rebellious response. Paul is compassionate enough to understand the people’s initial rejection. His love will not allow him to give up on these “children.” Also noteworthy in this scene is the statue of the Roman soldier with its back to Paul, a particular body language used by Raphael to indicate how the authorities have turned their backs on Paul’s message.

At various times in his letters Paul calls the Christians “my children,” and yet some may find it hard to visualize Paul as a parent lovingly doting over a child. Images of God inscribing us in the palm of his hand, of our being his delight as we play in his presence, or our being the apple of God’s eye are easier to imagine, but it is challenging to envision Paul through similar parental language. “. . . [W]e were gentle with you, like a nursing mother comforting her child” (1 Thes 2:7). This tender image of Paul stands in seeming contrast to other images we may have conjured both from his writings and from centuries of iconographic, stern-looking portraits.

Yet Paul relates to his Christian converts as a concerned and loving parent. Nowhere in his writings is this seen more than with the Christian community at Galatia. Writing to them, Paul declares emphatically, “It’s no longer I who live, it’s Christ who lives in me!” (Gal 2:20). His identification with Christ thrusts the great Apostle Paul into his apostolic work with the goal of molding all who hear the Gospel into the pattern of Christ, that is, “until Christ takes form in you” (Gal 4:19). The nature of the formative process calls on Paul’s parental resources as he seeks to identify himself to his spiritual children as both mother and father, displaying love and responsibility similar to that of parents who guide the development, formation, and education of their offspring into mature adults.

Like a mother angered by those who threaten her children or an infuriated bear robbed of her cubs (cf. Hos 13:8), Paul verbally attacks those who intimidate his beloved Galatians, to whom he has given life. It is within this context—of antagonism caused by agitators who have undermined Paul’s authority, and of his additional disappointment with the Galatians for believing the “false teachers” over him—that Paul writes: “My children, once again I’m suffering birth pains until Christ takes form in you” (Gal 4:19). These Christians are no longer faceless believers but have become Paul’s children. “[Y]ou don’t have numerous fathers—I was the one who begot you in Christ Jesus through the good news” (1 Cor 4:15). In giving “life,” Paul begets the believer just as a mother and father beget their children and assume the responsibility to nourish and form them. Hence, Paul cares deeply for the Galatians, even though he suspects that the Christian community does not yet fully understand his investment in their spiritual birthing and development.

There are two thoughts to consider in Paul’s declaration: “My children, once again I’m suffering birth pains until Christ takes form in you” (Gal 4:19). The first is that Paul’s parental language, claiming the Galatians as his dear children, conveys his willingness to suffer again and again for them. The second gives voice to the purpose for which he is willing to suffer, namely, until Christ is formed in them— that is, when they can genuinely declare with Paul that they are alive in Christ Jesus (cf. Gal 2:20). This is Paul’s apostolic project: to give life through his preaching, to nourish his spiritual children through his visits and letters, and to invest everything of himself, including suffering for his children’s behalf as they develop into full maturity in Christ.

The use of maternal and paternal metaphors is not unique to Paul. He was keenly aware that in the Hebraic tradition parental images were used to personify God. Biblical metaphors provide us with effective and limitless meaning because we are able to better comprehend a reality when we compare it to one with which we are already familiar.

Paul proclaims Jesus with the persuasive powers of the Jewish mother depicted in 2 Maccabees, who “Filled with a noble spirit . . . reinforced her woman’s reasoning with a man’s courage” (2 Macc 7:21), and who exhorted each of her sons to be fearless in the face of persecution and martyrdom. From the deep well of maternal instinct, Paul protects his spiritual children. He is tender and compassionate with their erring ways, and with tears he nurtures them back to the clear vision of Jesus Christ, who was crucified “before your eyes” (cf. Gal 3:1). Paul also instructs, disciplines, motivates, and guides, exhorting his children to imitate Paul’s own spiritual lifestyle in its continual movement from death to life.

Every parent, dutifully attending not only to the physical and moral formation of one’s offspring but their social, academic, and spiritual education as well, may at times have been disappointed by a child’s choices. Paul too experienced this; for example, it appears that he had reached an impasse with his beloved Galatians. What can Paul do or say to bring them back into the freedom of Christ? Paul’s aim for the Church in Galatia is striking: Paul wants nothing short of Christ taking form in them (cf. Gal 4:19). But how is formation toward christification to come about? In his writings Paul offers his children and disciples of today a blueprint for how to arrive at union with and maturity in Christ. To be formed into Christ, it is not enough simply to follow the moral law or to fulfill an exhortation for virtuous living. For Paul, what is important is a Christian’s full incorporation into Christ:

“Thus there’s no condemnation now for those who are in Christ. Jesus” (Rom 8:1).

“But if Christ is in you, even though your body is dead because of sin, then your spirit is alive because of righteousness” (Rom 8:10).

Reaching the full stature of Christ — that is, spiritual maturity — means being open to the Spirit of God who works in each person, leading him or her through a progressive and integral journey of growth. This is what Paul desired for his spiritual children and still desires for his heirs today.

Armanda Santos, FSP,  a member of the Daughters of St Paul, is Director of Field Education for St Patrick's Seminary, Menlo Park, CA.