PAUL'S CONVERSION AS THE OVERTURNING OF HIS NOTIONS OF GOD 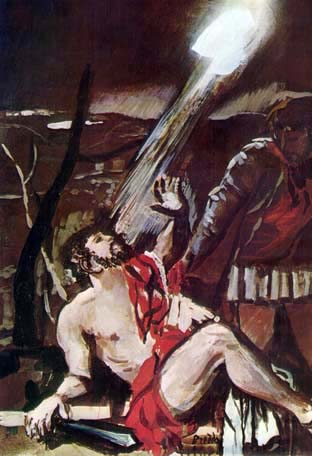 Paul's Conversion as the Overturning of his Notions of God

When Christians today talk about conversion they typically mean the process by which someone who has no faith or weak faith comes to strong personal faith in God. This is not the case with Paul. He had faith and commitment in abundance, as he puts it himself: I advanced in Judaism beyond many of my own age among my people, so extremely zealous was I for the traditions of my fathers (Gal. 1:14). He was determined to propagate the whole truth of Judaism. But of course someone else, Jesus the Nazarene, had been doing that for a few years and had been killed for it.

One of the deepest truths of the Old Testament is that God takes the side of the victim, of the underdog, of the outcaste. The Pentateuch (the first five books of the Bible) contains complex legislation about how to treat the widow, the orphan, the stranger, and the poor. The touchstone of Jewish faith is how one treats marginal people, victims. In something like 100 of the psalms God is on the side of the lone victim, against the crowd which is persecuting him. The prophets represent a voice pleading the cause of the victim in a way unparalleled in the ancient world. In the suffering Servant song of Isaiah 53, God works through this despised, rejected and persecuted figure of the Suffering Servant, rather than working through the persecuting crowd. Jesus consistently made God available to people in this way, not only taking the side of the marginalised, but being made as marginal as possible through crucifixion. It’s not a total surprise then that the only way God would get through to Paul, or the only way he wanted to get though, is as The Persecuted One. Paul assumed that his zealotry, his attitudes feelings and opinions were identical to God’s. Paul's persecution of Stephen and his fury with the Church had perhaps begun to dominate his life at that moment. Paul has to learn about a new God, or rather the God who was there all the time, the only God the Old Testament makes available. Paul’s zeal set him up for being “tripped” by the voice of God. Jesus doesn't knock him down asking, "Saul, Saul, why don't you believe in me?" Rather, it's "Saul, Saul, why do you persecute me?" Paul is, as it were, “ambushed” by Jesus.

Faith is always the invitation to step out of the crowd, out of one’s culture. When Paul is persecuting, he’s just one of his culture defending himself against those who are different When the fatwah was issued on Salaman Rushdie in the late 80’s, commentators noted how ironic it was that it was made “In the name of God, the Merciful, the Compassionate.” People asked how an injunction to kill someone can be made like this. Within a certain understanding of God it makes perfect sense. Some people see God as merciful to the group by defending it against people who are threats, so the killing of a blasphemer or heretic is an illustration of God’s mercy. But Jesus proclaims a God who behaves in exactly the opposite way and will even put the group at risk for the sake of one wayward person (for instance in the parable of the lost sheep in Lk. 15: 4-7). Paul had thrown all his energy into defending the cause of a God who stands behind fatwahs. While he was doing this, the God of Jesus who cherishes even the lost sheep crept up behind him and came as a blinding light, shining in the darkness of sacred violence and knocked him to the ground. Faith became for Paul not that which enabled him to persecute, but that which enabled him to listen to the voice of the persecuted one. This is a perfect example of what Christianity is. Paul’s conversion is an archetypal conversion. An essential ingredient of Christianity is learning that God doesn’t persecute.

There are many accounts in the Old Testament of God coming to people unexpectedly. What happens here is in line with that. Indeed in Galatians 1: 11-17 Paul explicitly tells his own conversion story in terms of something that happened to Elijah. Paul is driven by the very highest of motives, a concern for God’s truth. But it leads him to persecute people. Elijah’s zeal for God was admirable, but it had led him to kill four hundred false prophets. All his surety taken from him, Elijah was sent to Mount Horeb where he encountered God in a way that was completely new. Like Elijah, Paul was completely disorientated. Paul’s world collapsed, one might say his understanding of God collapsed and the greatest apologist for the Christian message walked out of the ruins. Part of the Bible’s plot from beginning to end is engineering just such an implosion,so that the true God can be encountered.

How has your own understanding of God grown and developed? Try to chart your own conversion.

About the Image: The Conversion of St Paul by G. Breddo.