PAUL'S CONVERSION AND OUR LENTEN "METANOIA" 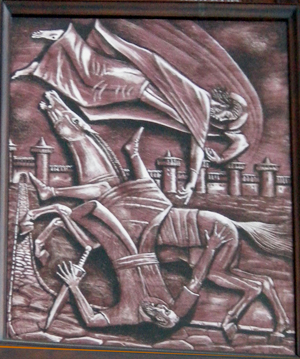 Paul's Conversion and our Lenten "Metanoia"

Metanoia is the Greek term which is translated as “conversion.” It is composed of two words: meta which means “beyond,” as used in terms like “metaphysics” (beyond the external nature); the other word is nous which is translated as “mind.” Literally, metanoia means “to go beyond the mind”—to transcend one’s narrow mental constructs, which include one’s pre-conditionings, impressions, prejudices, strongly-held opinions and stubborn beliefs. Moving beyond the mind opens a person to the dimension of Mystery, which is beyond definition and beyond all mental categories. Metanoia understood in this way, very aptly captures the essence of Paul’s experience and points to us the kind of conversion to which we too are being called today.

What are the narrow mental constructs, preconditionings and stubborn beliefs that Saul of Tarsus had to transcend when he encountered the Lord on the road to Damascus? One is the conviction about the ethnic superiority of the Jewish people, with whom alone God made a covenant from among all the nations of the world. For Paul to be able to accept that Yahweh now offers the gift of salvation to all peoples, regardless of race, it was necessary to go beyond his thinking that the Jews were ethnically superior to all nations. This was metanoia in its most real sense.

Another conviction that Paul had to transcend was his idea of the Jewish Messiah. Like his fellow-Jews, Paul’s mental picture of the Messiah was that of a mighty leader who would triumph against Israel’s enemies and restore the nation to prosperity and bliss. A crucified Messiah was, for him, absurd and inconceivable. Thus he believed that Jesus of Nazareth was an impostor, with false claims to Messiahship. The vision on the road to Damascus overturned Paul’s notions and expectations about the Messiah. He had to move beyond his mind, to transcend his prejudices and misconceptions about Jesus of Nazareth and accept him as truly God’s instrument of salvation not only for Israel but also for the rest of the world. Again, this was metanoia in its most real sense.

In his letter to the Philippians, Paul talks about things he used to consider as gain, but now he counts as loss, such as his conviction that the law was absolute and dedicating his whole life to it as a Pharisee was a prestigious thing. He moved beyond what the mind considered valuable and important and this opened him to the dimension of Mystery, which is the sphere of God. This moving beyond the mind was metanoia in its most real sense. Paul recognized how the mind could become a block to spiritual progress, how a person can cling to one’s concepts and convictions about God and holiness and get stuck there, trapped by ideas which are too narrow to contain the Mystery. In the area of interpersonal relationships, it is the differences of ideas and convictions, the insistence on one’s opinions and the attempts to impose them on others that cause friction and tension in dealing with one another. That is why Paul’s exhortation to conversion in the Letter to the Romans is expressed in this way: “Be transformed by the renewing of your minds” (Rom 12:2).

In the Damascus Road experience, Jesus Christ opened to Paul the dimension of the beyond. But it was just the beginning of a process which was to be carried through in his entire lifetime—a constant going beyond the mind so as to open oneself up to the dimension of Mystery. It is in this way that we can look at Paul’s experience as the model of conversion to which all of us are being called, here and now in our own life-situations.

Excerpted from Glimpses of Paul and His Message

The Conversion of St Paul by Veroi, from the doors of the Basilica of St Paul outside-the-Walls, Rome. Photo by Sergia Ballini, FSP.