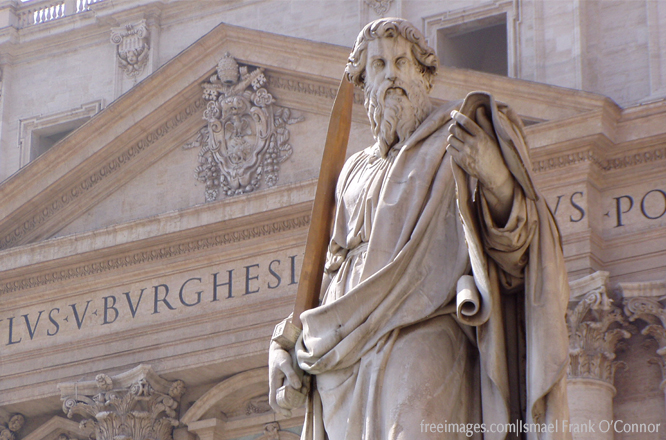 One way by which biblical authors call the readers’ attention to the importance of a concept, a character, or an event in their work, is through repeated reference to it. “Redundancy” is not a new technique discovered by advertisers. The biblical authors have long known its efficacy and employed it extensively to get their message across.

The story of Saul of Tarsus’ meeting with the risen Christ on the road to Damascus appears three times within the twenty-eight chapters of Luke’s second volume, known as the Acts of the Apostles (9:1-9; 22:6-16; 26:12-17). Luke has placed the three versions of the story at strategic points in his narrative, each time with the intention of drawing the readers’ attention to a particular aspect of Paul’s experience.

The purpose of the first account of the Damascus experience (Acts 9:1-9 ) is to insist that Saul actually saw the risen Christ. Why did Luke find it necessary to insist on this point? There are two primary and related reasons. First, because it was Paul and not any of the original apostles who would carry out Christ’s explicit will of bringing the Christian message out of the confines of Israel, thus realizing its universal character. In the first chapter of Acts, before Jesus ascended into heaven, his final words to his disciples were: “You will be my witnesses in Jerusalem, in all Judea and Samaria, and to the ends of the earth”(1:8). Paul was not present in this gathering; he was not yet a follower of Christ. And yet in the development of Luke’s narrative, it was Paul who would actually become Christ’s witness to the “ends of the earth.” The apostles one by one disappeared from the narrative of Acts and were not even said to have gone out of Israel to preach the good news. From chapter 13 to the end, Paul dominates the narrative. The book concludes with Paul’s arrival in Rome which, as the seat of the most powerful empire of that time, symbolized the “ends of the earth.”

The second reason for Luke’s insistence that Saul of Tarsus actually saw the risen Christ is to put Paul on an equal footing with the other apostles, so that again he may justify Paul’s role as the leading protagonist in his narrative. Luke has to prove that Paul was qualified for the role. This proof is warranted by Peter’s definition of who was to be considered an “apostle.” When choosing a replacement for the ill-fated apostle, Judas Iscariot, Peter explicitly said that the person must be a witness of the resurrection (cf. Acts 1:22), therefore, one who had seen the risen Christ.

The second account of the conversion is presented as a speech delivered by Paul before his fellow-Jews. Here, Luke’s intention is to give the religious meaning of Paul’s blindness. While the first account of the Damascus event simply tells us that “…when Saul opened his eyes he could see nothing,” the second account tells us the reason why he became blind: “…I could see nothing because of the brightness of that light…” The Greek word here translated “brightness” is doxa: “glory.” The cause, therefore, of Paul’s blindness is not just the light, but the “glory” of the light. Paul’s companions, in fact, also saw the light but they were not affected by it. Only Paul saw the “glory” of the light and this brought about the loss of his sight. The expression “glory of the light” indicates how Paul’s experience of the risen Christ far surpasses that of the other apostles. Bible scholars say that the Christ revealed to Paul on the road to Damascus was not just the Christ of the post-resurrection appearances, but the Christ exalted at the Father’s right hand. The vision of the exalted Christ rendered Paul sightless. This is Luke’s literary device to express Paul’s realization of his helplessness in the face of the divine action. God is irresistible!

In the third account (Acts 26:12-17), Luke demonstrates that Paul is a prophet and that his mission is the extension of the mission of the Servant of the LORD in the Book of Isaiah. Luke presents Paul’s mission in the language of Is 42:7. The most distinctive feature of the Servant of the LORD is his destiny to suffer and die in carrying out his mission. Paul is rightly considered by some Bible scholars as the “Second Servant of the LORD.” He underwent many hardships and oppositions in the course of proclaiming the Good News. And he crowned his mission with a martyr’s death in Rome, the seat of the most powerful empire in the known world of his time. Thus was fulfilled in Paul Christ’s words before his ascension into heaven: “You shall be my witnesses… even to the ends of the earth” (Acts 1:8). In Paul, the Second Servant of the LORD, Christ’s desire that his good news may become a universal message, saw its realization.