PAUL'S CONCERN FOR THE CHURCHES 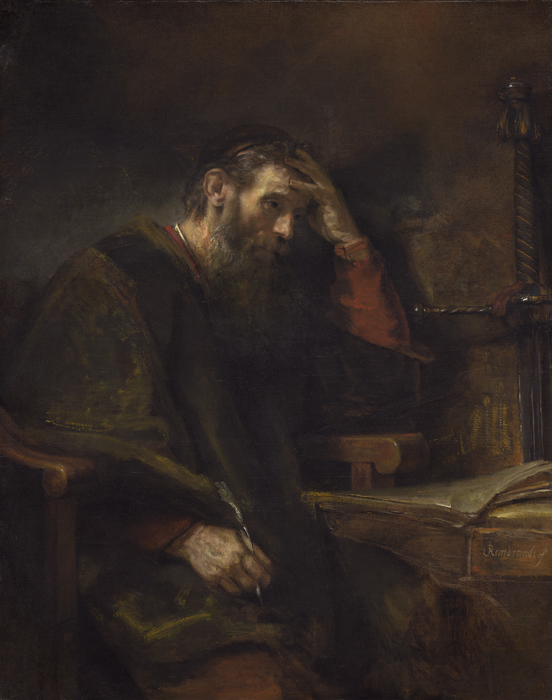 Paul's Concern for the Churches

Apart from these external things, I experience daily cares

and anxiety for all the churches. If anyone is weak, I too am weak!

If anyone is led into sin, I too am ablaze with indignation!

An attribute common to all of Rembrandt’s paintings of Paul is old age. As depicted in this painting, the Apostle is an elderly man, devoid of virile strength and grace. He is a lonely figure sitting in darkness, weighed down by layers of warm clothing. Rembrandt seems to have left nothing in writing to explain why the Apostle was a favorite subject of his, or why he chose to present Paul as older and vulnerable.

In this 1657 painting, Paul sits in front of a wooden table, filling the space and affording only a partial view of his torso. This gives us the sensation of being in proximity to him. He wears a dark, blanket-like cloak over a red tunic, which is visible only on his arm and neck. Paul also wears an inner white garment and, on his head, a Jewish yarmulke.

Leaning against the wall, and dominating the right side of the painting, is a sword proportionally larger than normal. This immediately reminds us of Paul’s martyrdom by decapitation; it also provides a visual split in the painting, with a certain tension building between Paul and the sword. Is this the tension to which Rembrandt may be visually referring: “I’m torn between the two alternatives—I wish to depart and be with Christ, for that is far better, but for your sake it’s more necessary to remain in the flesh” (Phil 1:23–25)? On the table parchments are laid out. Paul seems to be taking a break from them, yet he still loosely holds a writing reed in his right hand. There is no direct source of light; only Paul’s face and right hand are illuminated, possibly indicating that they are the repository of God’s inspiration.

As we look more closely, we feel as if we are intruding into Paul’s sacred space, without his being aware that we are observing him. His venerable and attractive face is that of an approachable person, yet we refrain from disturbing him. Paul’s eyes are focused on one spot, but he appears to be looking beyond the confines of the four walls. Is he remembering someone or something dear? Or is he perhaps trying to discern just the right word to convey a teaching? His other hand rests lightly against his head, a pose related to thinking or pondering.

The darkness shrouding Paul does not allow us to see whether he is in prison or in a comfortable room. This contributes to a sense of mystery hovering over the scene, a mystery which is due not to our inability to know the man, the apostle, the saint, but rather to the depths still left to discover and love about him. Paul’s letters reveal an apostle who cared deeply for those he “had begotten” by his preaching of the Gospel. He agonizes over possibly hurting people with his words, cares about their physical and moral health, wants them to do well so that he may be proud of them, and above all wants them to live “in Christ.”

Among the sufferings he speaks of in his letters, Paul mentions his concern for the churches he has founded (cf. 2 Cor 11:28–29). When his credibility as an apostle is challenged, it causes him grief. His other anxieties include the way the Galatians behave toward him:

[Y ]ou know that it was due to an illness of the flesh that I first pro- claimed the good news to you, and although my condition was a trial for you, you didn’t despise or disdain me; instead, you received me like . . .  Jesus Christ. What has become of your blessed joy? . . . Have I become your enemy, then, by telling you the truth? (Gal 4:13-17)

The monetary collection for the Church in Jerusalem (see Rom 15:26–26 and 1 Cor 16:1ff.) also preoccupies him. Paul offers solicitude for the poor as evidence that his gospel—as his ministry—is genuine! “Their one concern [that of James, Cephas, and John] was that we should remember the poor, which was the very thing we were eager to do” (Gal 2:10). Paul has also heard of the sufferings of the church in Philippi, and he encourages the Christians there: “For God has graciously allowed you not only to believe in Christ but also to suffer for him. You’re engaged in the same struggle which you saw me engaged in, and now hear that I’m still engaged in” (Phil 1:29–30).

Is Paul’s anxiety over what may happen to his “beloved children” excessive or somehow evidence of the Apostle’s weak faith? On the contrary, the anxiety to which Paul refers stems from affectionate concern rather than from a lack of faith in the graciousness of God’s protection. When Paul takes leave of the church in Miletus, he says: “And now I commend you to God and to His word of grace . . . ” (Acts 20:32). Paul cares not only for the churches he founded but also for the individuals who make up these communities, especially those he considers coworkers in the Lord. The following are a few of the persons we read about:

Paul also has his critics, those who do not hold back from complaining about him. Some people accuse him of using fiery words when he is absent and of not having the courage to confront them in person (cf. 2 Cor 10:1–2). N. T. Wright, commenting on Paul’s Letter to the Galatians, surmises that when Paul uses more tender language it is not because he lacks courage. Rather, it is as if he

stops talking theology, breaks off his train of thought, and speaks in quite a different way to his surprised hearers, requiring his hearers (not to mention his readers 2,000 years later!) to follow it closely and think hard. Now, quite suddenly . . .  he tells them what he’s thinking, how it feels, what sort of thoughts are rushing through his head at a more personal level. This is a heart-to-heart moment. Almost every line is an appeal to friendship, to family loyalty, to a mutual bond established by their common experience of what God has done for them together*....

In a similarly heartfelt way, Paul writes to the Christians at Philippi, thanking them for the gifts they sent during his imprisonment. Their generosity is disarming, and Paul opens his heart to them, sharing some of his concerns. He tells them of his detractors: “Those who proclaim Christ out of jealousy do so insincerely in the hope of causing me trouble while I’m in prison” (Phil 1:17). For Christians, mandated by Jesus to love one another, Paul gives powerful witness to the cause of “fraternal charity,” for he cares enough to intervene for the good of a brother or sister (cf. 1 Cor 5, 6, 10; 2 Cor 8). However, Paul’s deep concern for his flock does not rob him of his serenity in the face of conflicts, disappointments, accusations, misunderstandings, and external demands. In fact, his sensitivity leads him to prayer on the Christians’ behalf:

“May God, the source of hope, fill you with all joy and peace through your belief in Him, so that you’ll overflow with hope by the power of Holy Spirit” (Rom 15:13).