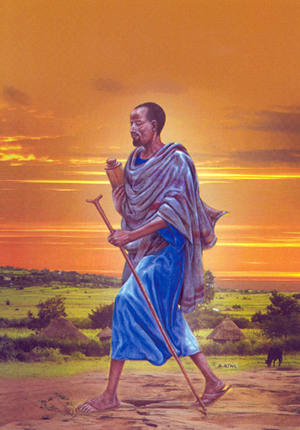 I continually mention you in my prayers and ask that somehow

by God’s will I’ll finally manage to come to you, for to you and

to share with you some spiritual gift in order to strengthen you,

that is, so we may be mutually encouraged by one another’s  faith.

In this painting the Apostle appears to be journeying alone, although at that time it was customary to travel in groups for reasons of safety. The artist may have intended this aloneness to emphasize the moral weight of Paul’s responsibility for the churches. The walking stick that he wields to secure his step on the rough terrain can also be seen as a shepherd’s staff, in Christian iconography a symbol for the office of a bishop, whose responsibility is to tend, guide, protect, and lead God’s people after the manner of Jesus, who identified himself as the Good Shepherd.

The cities Paul visits on his travels are large, thriving centers of commerce with sizable populations. In them, ancient myths, history, and culture have built up over time. Cities are connected by a vast system of roads and waterways that allow for trade but also serve as conduits for the exchange of ideas and information. This is especially true of cities with ports and shipping routes that brought speed to travel for a world already demanding connectedness. Antioch, for example, built near the Mediterranean coast in what is today southeastern Turkey, was such a city. Thessalonica, in Greece, was also a major port city, while Corinth is strategically located on an isthmus that connects the northern and southern portions of Greece, with the Adriatic Sea on one side and the Aegean Sea on the other.

Established as it was in the ancient world, travel had many setbacks. It does not take much imagination to understand how hazardous Paul’s long journeys were. The dangers he encountered by sea are well recorded by Paul: “[T]hree times I was shipwrecked— a day and a night I spent out on the deep!” (2 Cor 11:25). Because waterways depended on good weather for navigation, ships did not sail during the inclement winter months.

In my many journeys I’ve been in danger from rivers, from robbers, from my own race, from Gentiles; I’ve been in danger in the city and in the wild, on the sea and from false brothers. I’ve toiled and been through hardships, spent many sleepless nights, been hungry and thirsty; I’ve often gone without food, been cold and without sufficient clothing. (2 Cor 11:26–27)

When Paul speaks of having experienced sleepless nights, hunger, and thirst, we can assume that at times he found himself far from human habitation, with no other alternative than to spend his nights exposed to the cold, deprived of even basic human necessities like food and drink.

The Acts of the Apostles chronicles Paul’s journeys, dividing them into three apostolic trips and a final journey to Rome while under arrest to stand trial before Caesar. The first journey is narrated in chapters 13 and 14 of Acts; the second is found in Acts 15:36–18:22; and the third is recounted in Acts 18:23–21:16. Paul’s final trip to Rome takes place in Acts 21:15–28:31. However, no general consensus exists among Pauline scholars on whether the apostolic journeys actually followed the itinerary found in Acts. In his letters Paul never refers to his journeys as an organized plan of action, nor does he itemize his various travels. Nevertheless, according to Pauline scholars, the framework of the trips as described in Acts does serve as background information for studying the far-reaching extent of Paul’s influence. The Apostle gives us no hint regarding the time it took to travel from city to city. From Acts we can approximate how long he stayed in certain places but not the timetable for the long miles in between. We who travel today in speed and comfort may fail to recognize Paul’s commitment of time and personal abnegation in traveling by foot from place to place.

What drove Paul onward in his journeys despite fatigue and the hardships of travel? It was his conviction that the Gospel was of divine origin, as he told the Galatians: “. . . the good news I proclaimed is not a human gospel, for I didn’t receive it from a man nor was I taught it— I received it through a revelation of Jesus Christ” (Gal 1:11–12). And so he was driven by an inner urgency to share, to yell out, to tell others the Good News.

In Paul’s time the road system and waterways became the means by which the message of Jesus reached far and wide. In our day, the means of communicating with one another have evolved beyond our full comprehension in terms of their speed, quantity, impact, and potential. What would Paul do if he lived today? Without a doubt his travels would take him along the information superhighway, and he would make use of every means of communication possible to preach Jesus Christ. New marvels of communication can be harnessed to multiply the Church’s apostolic efforts; all that remains is a commitment to the mandate of Jesus: “Go therefore, and make disciples of all nations . . . ” (Mt 28:19).

Armanda Santos, FSP,  a member of the Daughters of St Paul, is Director of Field Education for St Patrick's Seminary, Menlo Park, CA.