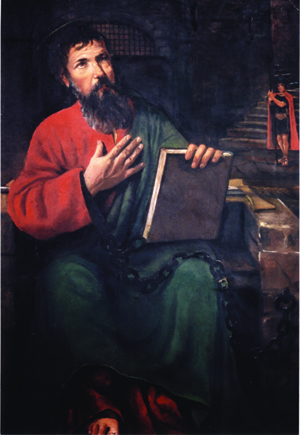 This painting was not done by a Caravaggio or a Rembrandt. In fact, it is far from being a masterpiece according to artistic sensibilities and technique. However, it conveys a sense of empathy toward and esteem for its subject. As the following story indicates, the amateur artist had reason to admire and take encouragement from St. Paul in chains.

For a period during World War II, the Daughters of St. Paul in Staten Island, New York, each Sunday hosted at their convent approximately forty to 120 Italian prisoners of war. The men would attend Sunday Mass and then stay for a spaghetti dinner cooked by these sisters. Eugenio Roccali, the artist who painted St. Paul in Chains, was one of the young prisoners of war. In 1947, after the war had ended, Roccali presented this painting as a gift to the Pauline community in gratitude for those special Sundays. His choice to portray Paul as a prisoner must have stemmed from Roccali’s own experience during this difficult time away from his homeland. He would naturally have identified with the constraints imposed on Paul during his internment, as well as with the pangs of longing and loneliness caused by separation from loved ones. The painting continues to be treasured by members of the community, not only for the thoughtfulness of the gift or its historical significance, but also for the iconographic value it holds for every Daughter of St. Paul who, like her father Paul, has been chosen to “bring the charity of Truth.”

Looking at the painting, we see Paul as the dominant figure taking up most of the space on the canvas. Giving diminutive importance to the prison guard, the artist compels us to focus our gaze on the prisoner. This visual perspective puts Paul “in your face,” presenting him as a person of interest who demands one’s full attention.

The Apostle sits on a stone structure that resembles a throne or cathedra, the bishop’s chair placed in the cathedral of a diocese as a sign of the bishop’s teaching office. The chair conveys Paul’s authority as an apostle of the word. Here he is teaching the faithful not with his verbal eloquence, since he is in prison, but with his letters, represented by the heavy book he holds. These letters give the written word a freedom— “the word of God cannot be chained”— that the writer himself is denied: “I’m suffering and in chains like a criminal . . . ” (2 Tim 2:9).

Paul’s face exhibits signs of fatigue, yet his eyes gleam in the conviction that his sufferings “. . .  don’t compare with the glory to come, which will be revealed to us” (Rom 8:18). “. . . [ W ]e keep our eyes on what is unseen rather than on what can be seen, for what can be seen is transitory but what is unseen is eternal” (2 Cor 4:18). Paul’s hands are large— the strong, gifted hands of a craftsman, the tent maker that he was. One hand is placed over his heart, indicating it as the living source of his words and the place from which he takes his teaching.

The darkness and dampness of the stone prison is juxtaposed against Paul’s warm radiance. His red garb symbolizes his imminent martyrdom, which is further emphasized by the sword that lies across the back of his throne. A mantle completes Paul’s attire, its green color representing Paul’s rich spiritual life and his hope in eternal life.

In various passages Paul identifies himself as a prisoner, but how many times was he actually incarcerated? According to secondary sources, namely the Acts of the Apostles and the Second Letter to Timothy, Paul may have been imprisoned as many as five times, each imprisonment varying in duration. The following are among the references:

​“And when we came to Rome, Paul was allowed to stay by himself, with the soldier who guarded him” (Acts 28:16).

Among Paul’s internments, two in particular merit closer examination. First, the Apostle composes his letter to the community at Philippi from prison, the location of which is not known with certainty. This letter, as we have already seen, is one of Paul’s most affectionate. He opens it by expressing his love for the Philippians: “It’s right that I should feel this way about you because I have you in my heart, and because you all share my grace, both in my imprisonment and in the defense and confirmation of the good news” (Phil 1:7). In spite of his sufferings, Paul rejoices. He can be jubilant first because his imprisonment has . . . “actually had the effect of advancing the Gospel” (Phil1:12); instead of his confinement being a setback, his chains have given others “the confidence to proclaim the word even more fearlessly” (Phil 1:14). Paul is constrained, but the Gospel is free— for the Word of God cannot be bound. Paul’s second motive for rejoicing is precisely that he is “in chains” for Christ and everyone knows it, permitting this witness to further advance the cause of the Gospel.

The other imprisonment to consider is the one that begins in Caesarea (Acts 23:35; 24:27) and continues with Paul en route to Rome. After having been in prison for two years, Paul is finally sent to Rome to stand trial. There follows the arduous journey by sea with the shipwreck in Malta, the survival of which would have been a stressful experience for anyone, but much more so for Paul. He is older and therefore more frail than his companions, especially after having spent two years in jail. Nonetheless, the situation at Malta bears blessings for Paul in the numerous converts that result from his preaching the Gospel (cf. Acts 28:1–10). Leaving there, being under arrest, Paul continues on his way to Rome. Before he can rest, there is still the long journey to make along the Via Appia or Appian Way, the road that runs from the coast to the capital.

The Acts of the Apostles notes Paul’s arrival in Rome: “[S]o we came to Rome. When the brethren there heard about us they came as far as the Forum of Appius and Three Taverns to meet us, and when Paul  saw  them  he  gave  thanks  to  God  and  took  courage”  (Acts 28:14–15). Paul’s journey along the Via Appia, during which he would have been bound and escorted by Roman soldiers, suggests a parallel to the journey down the Via Dolorosa that Christ made on his way to crucifixion and death.

Knowledge, zeal, and creativity may have marked Paul’s work (cf. 1 Cor 1:8–2:5; 2 Cor 11:5–6), but he gloried in and even boasted of his weaknesses (see 2 Cor 12:9; cf. Gal 6:14). He knew that ultimately these were the final word in his authentic testimony to the Crucified, the source of his strength (cf. Phil 4:13–14). At the end of the day, Paul’s sufferings sealed the veracity of his gospel, for which he was willing to make the ultimate sacrifice of his life.