PAUL AS A BIBLICAL AUTHOR 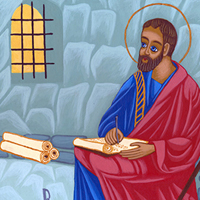 Paul as a Biblical Author

“Paul, Silvanus and Timothy to the church of the Thessalonians in God the Father and the Lord Jesus Christ—grace and peace be with you!” (1 Thes. 1:1).

This letter of St Paul to the church in Thessalonica is probably the first of many other letters that we have from the pen of the Apostle. It is also considered to be one of the earliest Christian writings, coming at a time when the early Church felt the need to record its beliefs and its early story.

“According to a saying of the Fathers, Sacred Scripture is written principally in the Church’s heart rather than in documents and records” (CCC 113).  What does this tell us about Paul the Scriptural author? He was so in tune with the Body of Christ, that he was able to articulate the Church’s faith in a definitive way while writing under the inspiration of the Holy Spirit. The Bible is fully human and fully divine, written under divine inspiration, but allowing the author’s personality to shine through. Nowhere is this clearer than in the Pauline letters. Whether it is Paul’s upbringing, his education, his overactive intellect or his personality, in the letters, these all become part of the enfleshing of the Word of God. We cannot avoid being struck by his delight in irony and paradox, his frustrations, his affection—and even his hurt feelings when his love is betrayed.

St Paul was bi-lingual, fluent in Greek and Hebrew. His Greek was not just good, but cultured. But he was so intensely focused on presenting the Gospel that he sometimes made mistakes in grammar, or wove impossibly elaborate sentences, with one image or argument after another. The Bible itself admits that the letters may a bit hard to understand: “Our beloved brother Paul wrote to you according to the wisdom given to him in all his letters.... Some things in them are hard to understand and the foolish distort them to their own destruction... just as they do the other scriptures” (2 Pet 3:15).

By the year 100, there was a collection of Pauline letters being circulated not just among the Thessalonians and Corinthians and Philippians, but all the way to Egypt and France.

So Paul wrote “letters,” but at the same time, they weren’t only letters. They were a kind of “real presence of Paul” made available through the written word; today we would call it a “virtual presence.” Paul was expecting his letters to be read or “performed” in the assembly that was gathered for worship, in the same setting in which the Christians joined to hear the Word of God in the Scriptures of Israel—since the early Christians adopted the synagogue prayer service with readings, instruction and intercessions. In Colossians we read: “And when you’ve read this letter, have it read to the Laodicean church as well, and you should also read the letter from Laodicea” (4:16).

St Paul’s theological thought developed in the course of the letters as he continued to grow in his understanding of the Gospel and its ramifications. That might be easier to see if we read the letters in the order in which they were written, rather than the order in which they appear in the Bible today. Most Bibles have introductions and footnotes that explain the purpose of the letter, its intended audience, time and place of writing, and more. Each letter has a different story, and knowing something of the story helps us read each one in the spirit in which it was written.

Recent scholarship suggests that a few of the Pauline letters were written not directly by Paul but possibly by his disciples, or by a further generation of Christians who spoke in Paul's name to address issues they were facing. Regardless of who exactly penned a letter, we recall what the Vatican II document on Divine Revelation explicitly said: “To compose the sacred books, God chose certain men who, all the time while he employed them in this task, made full use of their own faculties and powers so that...it was as true authors that they consigned to writing whatever he wanted written and no more” (DV 11).

Anne Flanagan, FSP, is a member of the Daughters of St Paul and a specialist in social media.