PAUL AND HIS COMPANIONS 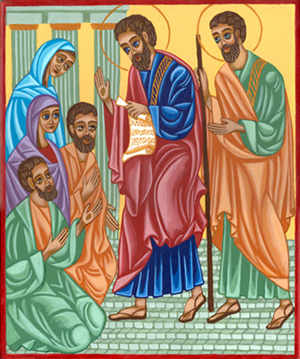 Paul and his Companions

Saul's experience of the risen Christ on the road to Damascus had convinced him that Jesus and his followers were one living body. Baptized into that body (perhaps by Ananias), Saul tried to join other believers in prayer and in evangelization, but he had a hard time finding acceptance. He tried to prove his faith in Christ by preaching, but that only brought more troubles upon an already beleaguered group. In Jerusalem, the trusted Levite Barnabas put his own credibility on the line and vouched for Saul. Barnabas, originally from Cyprus, had a special gift for recognizing the signs of the Holy Spirit's action, and he saw them clearly in the hapless former Pharisee. On Barnabas' word, Saul was welcomed into the community of Jerusalem, but not even Barnabas' recommendation could prevent Saul's preaching and argumentation from unsettling the peace of the local Church. Saul had to be invited to move on, to return to his home province of Syria and Cilicia. Barnabas, meanwhile, was sent to Antioch, the third-largest city of the Roman Empire, where significant numbers of Gentiles were seeking baptism. Later, it was Barnabas who tracked Saul down and invited him to Antioch. It may be hard for us to believe, but Paul started out as a junior member of a missionary team that was headed by that noble and good-natured Cypriot. Something happened on their first missionary journey, however: Barnabas began to decrease, and Paul to increase. Luke even reverses the order of their names in the story, and Barnabas pretty much disappears from the Scriptural radar. Works of art depicting events in that journey invariably show Paul in the foreground.

From this point in his life on, it can be easy for us to think of St. Paul as a rugged individualist, not as a team player. He may have attempted to start out that way, preaching and debating without reference to the rest of the community, but his lonely years in "exile" home in Tarsus prepared the early convert for the essential role of community in the mission of evangelization. Still may be hard for us to shake the image of Paul, the Lone Ranger for the Gospel. Even the liturgy reinforces this, telling us that we are about to hear "A reading from the letter of St. Paul..." But Paul rarely claims to be the sole author of most of those letters. We have to admit that Paul's is the only "voice" we hear (loud and clear), and most of those letters seem to have only one "signature" at the end: Paul's. Still, the letters usually open with a greeting from Paul and Silvanus or Timothy, whomever he was traveling and working with at the time. Paul made it a point to work with others and to entrust them with real care for the churches they founded together. Many of these missionary collaborators became Paul's "co-authors" as well as the troubleshooters he sent to communities that needed pastoral guidance.

Since Paul names dozens of people in his letters, it would be overwhelming to list in detail what we know about them all, but several of Paul's co-workers stand out. Two of them (Timothy and Titus) even have their names attached to books of the Bible. Timothy (from Lystra) joined Paul and Silas on the second missionary journey. Timothy appears several times in Acts. From Paul's letters we know that he played an important role in visiting the Thessalonians and the Corinthians on Paul's behalf. He is credited as a co-author of five of the letters (2 Corinthians, Philippians, Colossians, and 1 and 2 Thessalonians), and was the addressee of two of them.  These present us with a man who was young, sensitive even to the point of shyness, and somewhat frail in health. The letter to the Hebrews (dated anywhere from five to twenty years after Paul's martyrdom) mentions that Timothy had recently been released from prison: he had indeed "followed [Paul's] teaching, way of life...patience, love, endurance" (2 Tim. 3:10). Silvanus, also called Silas, was a Roman citizen like Paul. He made the second missionary journey with Paul, and suffered imprisonment with him at Philippi. Like Timothy and Titus, Silvanus was an important co-worker of Paul's, especially with the amazingly contentious Corinthians.

Paul's most remarkable co-workers were a husband and wife team: Aquila and Prisca. Although Luke uses the diminutive "Priscilla" for the feminine partner in this dynamic duo, Paul never does. That, and the interesting fact that Prisca is almost always named first, can tell us something about the woman. Paul met the pair in Corinth, where they had been displaced when the Emperor ordered all Jews to leave Rome. They were already Christians when Paul began working with them at tentmaking. (Paul boasted to the Corinthians that he provided for his needs though his own hard work.) When Paul left Corinth, Prisca and Aquila left with him for Ephesus, where they stayed. It may have been in Ephesus that they "risked their necks" to save Paul's life (see Romans 16:3-4 and 1 Corinthians 15:32). They instructed the brilliant and influential Apollos, who had only a rudimentary knowledge of the Gospel, but who was preaching zealously. We find them again in Rome, then again in Corinth, and finally (in 2 Timothy), they seem to be back in Ephesus. There are few missionaries in the history of the Church who are on a par with Prisca and Aquila, that first-century, first-generation team who were Paul's "co-workers for the Gospel."

"Works well with others" is not the sort of notation we might expect on Paul's report card, but the record shows that he did, after all, work very well with others--if they were as intent as he was on the spread of the Gospel.

Paul and his companion preaching the Gospel, painting by Teresa Groselj, FSP.