PAUL AND WOMEN, THE STUFF OF LEGENDS 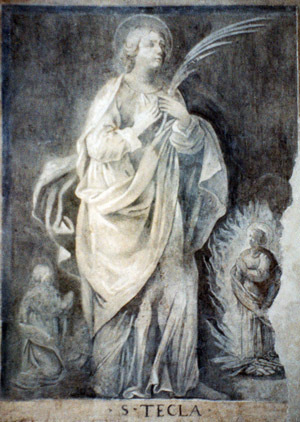 Paul and Women, the Stuff of Legends

Early Christians would be mystified by the reputation St Paul has in some contemporary circles as a bit of a misogynist.  Modern readers may chafe at passages in Paul's letters that seem to threaten hard-won benefits for women in society, but early Christian sources agree in presenting Paul and his teaching as especially welcome to women. This means that when it comes to St Paul and women, we have to go on more than what we read in the Bible. Fortunately, St Paul was a popular character in early Christian fiction: novels and popularized works of theology (some of it questionable) with titles like "The Acts of Paul and Thecla"; "The Acts of Peter and Paul" "The Life and Conduct of the Holy Women Xanthippe, Polyxena and Rebecca." For most of the Church's history, people took these works at face value and blended them into the typically accepted biography of Paul. Some of these books may have even been written primarily for a feminine audience.

The earliest of these influential works was “The Acts of Paul and Thecla,” written about 200 A.D. by a priest in Asia Minor.  Thecla is not mentioned in the Bible, but there is such a strong line of tradition in her regard that her existence and something rather extraordinary about her personality can be considered reliable. As her story opens, the young Thecla overhears Paul preaching in a neighbor’s house in Iconium. Determined to join Paul as an evangelizer, Thecla ran away from home—and from her fiance. This led to her condemnation by the authorities. But when she was put into the arena, the lions licked her feet. She was tied to wild bulls to be torn to pieces, and the ropes frayed. Thecla was freed from her would-be martyrdom not only because nature refused to cooperate, but because the women of Iconium protested so strongly at the way she was being treated. She then dressed like a boy and went in search of Paul. In a playful reversal of the Easter story, Thecla came upon Paul near a cave in the region of Ephesus. Paul was praying in tears while Thecla stood unrecognized behind him.

Thecla was reputed to be an extremely effective evangelizer, carrying the Word of God beyond the domestic walls. Her strength of character in the face of torture earned her the title of “woman protomartyr” even though she is said to have died in extreme old age. Thecla's story appealed strongly to women in the late Roman empire. She was an example of a woman who exercised Christian freedom, choosing her own state in life as a virgin for Christ and exercising a ministry of evangelization that won her title “equal to the apostles". Her shrine became the third-most popular pilgrimage destination in the third century, visited especially by women unaccompanied by husbands, brothers or sons. Excavations in the area witness to a thriving trade in pilgrimage souvenirs and votive articles that were especially oriented toward women.

With her story situated within Paul's first missionary journey, Thecla was considered earliest of Paul's women disciples. But Roman women could not be without their own link to Paul, and they found it in the family of Senator Pudens, whose daughters, Pudentiana and Praxedes, consecrated their virginity to Christ. This is a very strong theme in early Christian literature associated with the memory of St Paul. (Some of those writings cross the line into heresy, condemning marriage entirely.) The family home of Senator Pudens is now the Church of St Pudentiana, located just a short walk from the Church of St Praxedes. Fabulous mosaics in the  triumphal arch depict Peter with St Pudentiana on one side, while across the arch St Paul has his arm around the virgin martyr Praxedes, presenting her to the Lord.

Yet another story takes up where the Acts of the Apostles left off, with Paul achieving his heart's desire of preaching in Spain. The the noble Xanthippe learned the Gospel from Paul and shared the Good News with her husband and her sister Polyxena; Polyxena underwent many trials, met and evangelized Rebecca, and was providentially restored to her family when she boarded the very ship on which Onesimus (a real-life convert of Paul's) was traveling to Spain to deliver some letters to Paul.

The traditional understanding of St Paul's attitude toward women was so positive that it even placed a woman at the scene of Paul’s martyrdom. From "The Acts of Peter and Paul," it is the story of Perpetua, the "Veronica" on Paul's Way of the Cross.

Paul, led to his execution by a squad of soldiers, passed the half-blind Perpetua (in some versions, Plautilla) along the way and asked her to loan him her kerchief for use as a blindfold. The woman willingly gave it to him, leading the guards to ridicule her for losing her kerchief to a man about to be beheaded. Miraculously, no sooner had the deed been done when the bloodstained kerchief miraculously came back to her--and with it, her sight. When the soldiers came by her way again hours later, they ridiculed her again on the loss of her scarf, and she told them what had happened. Then she prayed to “the Lord, the God of Paul.” The soldiers joined her in surrendering to Christ, landing them and Perpetua in Nero’s prison. After a flurry of prison-based evangelization, Perpetua and the three soldiers all joined Paul in martyrdom.

Through the stories of Thecla, Praxedes, Perpetua and others, early traditions are loud and clear that the women who encountered Paul became his co-workers for the Gospel. Not content simply to profess faith in Christ, they became apostles and evangelizers, especially to other women, sometimes ruffling feathers in the process...much like Paul himself, who said, “Imitate me as I imitate Christ.”

Anne Flanagan, FSP, is a Daughter of St Paul and specialist in social media.