PAUL, APOSTLE OF THE GENTILES 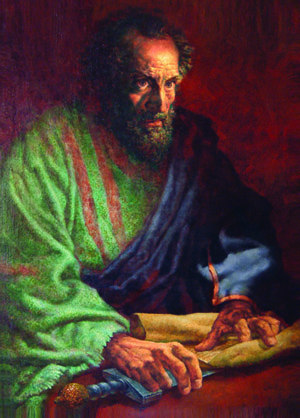 Paul, Apostle of the Gentiles

[F]or the One Who worked through Peter for

the apostleship of the circumcision also

worked through me for the Gentiles . . .

This formal portrait of the Apostle was done by twentieth-century Italian artist Nino Gregori, born in Trieste, Italy. Gregori, who gave this painting of St. Paul as a gift to the Daughters of St. Paul in Langley, England, confessed that it had required much reflection, and even caused him anguish, given the extraordinary personality of the Apostle.

Paul sits behind a table, which permits us to see him only from the waist up. A sword and a partially open parchment are the only items on the table, and his strong hands rest heavily on them as if guarding or protecting something precious. He wears a green tunic with red stripes, over which is draped a blue cloak with orange trim; both garments reflect a style consistent with clothing of first-century Palestine. The edges of his sleeves, seen above his right hand, are frayed.

The Apostle’s face appears stern; he almost seems to be frowning, as if he has been disturbed or interrupted in what he was doing. The painting shows evidence that Paul has been reading and not writing, for text already appears on the parchment and he holds no writing implement. Has Paul received unsettling news from one of the churches? Is he pondering his response? Indeed, his forward posture signals his readiness to act. This dramatic image of Paul — complete with piercing eyes, long nose, furrowed brow, receding black and gray hair, and bearded face — invites us to apply to him the following words of Scripture: “He crouches down, he stretches out like a lion . . . who dares rouse him up?” (Gen 49:9).

A light, dimly illuminating the entire work, shines brightly on Paul’s forehead. The word of God illumines his mind and calls him forth to be a herald, not of his own ideas and opinions but as a voice for the living God. Gregori has depicted Paul in full pastoral activity, in the attitude of listen- ing to inspiration, as he holds his parchments, which for him are instruments of evangelization. The  artist,  like  others  before him, has sought to reproduce not only Paul’s physical features but also the fire and spirit that motivated him.

What did Paul actually look like? We find in the The Acts of Paul and Thecla, a second-century document by an unknown author, the only extant physical description of the Apostle: “At length they saw a man coming, of small stature with meeting eyebrows, bald or shaved head, bow-legged, strongly built, hollow-eyed, with a strong, crooked nose.”

Images of Paul differ greatly depending on the artists, their particular insights into Paul, the degree of their fondness or admiration for him, and their artistic style. It may be argued that in Paul’s case, artists have often applied stereotypical features of the philosopher — i.e., a long beard and baldness — to indicate the Apostle’s knowledge and standing as a “lover of Wisdom” in the Person of Christ. However, the fact that certain characteristics depicted of Paul and Peter (including the latter’s short, curly hair and beard) have remained consistent from earliest times suggests that such features may be based on the saints’ actual physical appearance.

In terms of the attributes by which Paul is recognized, the sword is principal, since it was by decapitation that Paul suffered martyrdom. Both Paul’s Letter to the Ephesians and the Letter to the Hebrews also refer to the sword emblematically, speaking of the Word of God as “the sword of the Spirit ” (Eph 6:17) and as a “two-edged sword” piercing “between soul and spirit” so “it can discern the innermost thoughts and intentions of the heart” (Heb 4:12). Along with the sword, Paul often holds a book or scroll of parchment representing the word he proclaimed and the letters he wrote to the churches. The Apostle’s letters make up the bulk of the New Testament and constitute the first writ- ten commentary on the life of Jesus. “. . . [T]he good news I proclaimed is not a human gospel, for I didn’t receive it from a man nor was I taught it — I received it through a revelation of Jesus Christ” (Gal 1:11–12).

Who was this Apostle sent to proclaim the Good News to the Gentiles? If we want to know Paul we must look primarily at the letters he wrote, which give firsthand information about his person and teaching. Although we find more concrete details about Paul’s life in the Acts of  the  Apostles — attributed  to  Luke, whose  earlier  volume  is  the Gospel named for him — Pauline scholars have reservations as to its complete historical reliability. Today the most accepted approach to understanding Paul is to refer to his undisputed letters as a primary source, while using the Acts for supplemental information when it does not contradict Paul’s own words. According to contemporary Pauline studies, Acts is an especially dependable source for understanding the development of first-century Christianity, but caution is needed in harmonizing certain events recorded in Acts with the letters of Paul.

The Apostle Paul’s mission to the Gentiles involves preaching that Jesus, the crucified Christ, had been raised from the dead and that reconciliation with God comes about through Christ and not by the power of the Law. This becomes Paul’s Gospel, his Good News received by revelation from Christ, confirmed by the Church, and proclaimed by Paul, who declares himself its servant (cf. the Letter to the Galatians). Paul comes to view the Law as having only the function of regulating daily life, not as the source of life and definitely not something that should be mandated for the Gentiles. For Paul, justification comes not through circumcision or strict adherence to the Law, nor through slavery to religious practices; faith in Christ alone brings salvation.

The Gentile community delights in this Good News and accepts the Gospel Paul preaches. The church in Galatia is especially grateful, but as it happens, some “troublemakers” worm their way into Galatian territory, taking advantage of Paul’s absence and discrediting his teaching. These false teachers insist that the Gentiles need to be fully incorporated into Judaism— which meant, among other things, submitting to circumcision— before becoming Christians.

Paul’s Letter to the Galatians is his response to these agitators who taught an alternative gospel to Paul’s unchanging message. “I’m amazed that you’re so quick to desert the One Who called you by the grace of Christ and are turning to a different gospel” (Gal 1:6), the Apostle declares, hoping to shake the Galatians into stark reality. Paul’s anger with them is not surprising. He sees them discarding the very freedom Christ secured for them by his death and resurrection. Paul is justified in his discouragement; he has toiled to liberate these Gentile converts from their slavery to the Law, offering them the freedom of the Lord Jesus, yet now they seem to be slipping back into slavery (cf. Gal 4:8–9). He chides them: “Who has cast a spell over you? Before your eyes Jesus Christ was publicly portrayed as crucified!” (Gal 3:1). And he even laments: “I’m afraid that all my work for you may somehow have been in vain” (Gal 4:11).

Writing much later to the Christian community in Rome, Paul presents Abraham as a man whom God declared righteous before there ever was a Law to be followed and obeyed. If Abraham was pleasing to God because of his faith, Paul argues, why do non-Jews have to follow the Law so as to receive righteousness? The Law came with Moses, who lived centuries after Abraham. Paul states his case thus: “Abraham’s faith was credited to him as righteousness.... For the promise to Abraham and his descendants that they would inherit the world was based not on Abraham’s observance of the Torah but on the fact that he had been restored to fellowship with God through faith” (Rom 4:9, 13).

Paul’s fundamental teaching rests on this theme of salvation through Jesus Christ. It is the “Christ-event” that has brought humankind reconciliation, justification, salvation, and freedom. This is the Good News, offered first to Jews and now made available to Gentiles, and to each of us, and Paul is its herald.