OUR LADY OF THE PAULINE FAMILY 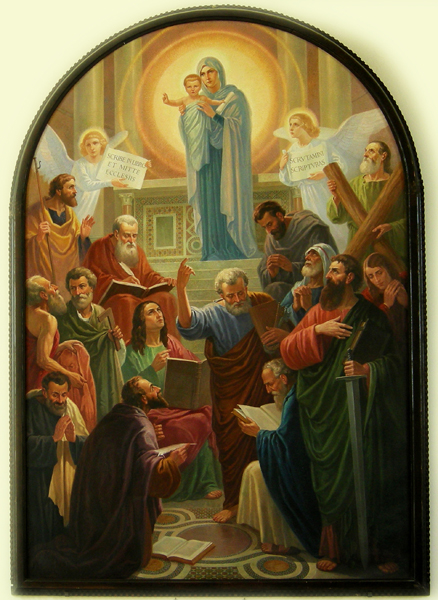 Our Lady of the Pauline Family

“Let us return to the sources. At the sources we find Mary, Queen of the Apostles, and if it was so at the beginning of the Church, there is nothing more certain than to draw from the ancient Faith. The water is purer when it is taken from its sources” (Bl. James Alberione).

Today the Pauline Family celebrates the Feast of Mary, Queen of Apostles. This title of Mary was particularly dear to Blessed James Alberione, who was particularly inspired by the devotion as practiced by the Palottine community. Like the Palottines, Alberione thought of Mary as an inspirer of missionary hearts, a model “apostle.”

The Icon of Mary Queen of Apostles

Early on, Blessed James Alberione was concerned that the spirituality he communicated to his sons and daughters would not be a matter of sterile words, or of abstractly pious thoughts. He knew the importance of the “way of beauty” and the power of the image to communicate and engage the person on many levels at once, and made every effort to have his understanding of spiritual realities depicted in various art forms. He gave detailed instructions to artists for every rendition of Mary as “Queen of Apostles.”

The picture precisely represents Mary carrying out her proper role: giving Jesus to the world. She is notholding Jesus tightly to herself, but offering him as light to all who pass by. He carries the scroll of the gospel, the Word of life. With his right hand he is gesturing with two fingers; in the first centuries this indicated not so much a blessing as the authority of the teacher who explains wisdom. “ And what must you accomplish in the world by representing Mary, by imitating Mary? First, interior holiness, and then after, giving Jesus to the world”.

Reading of the icon:

In the center, standing high, we see Mary presenting her son Jesus.
Jesus and Mary are looking ahead, outside of the icon. Jesus is carrying the scroll in his left hand and has three fingers of his right hand raised. Behind the figures of Mary and Jesus there is the Blessed Sacrament, large and luminous. Mary is standing on the last step in front of the altar.

To Mary's right there is an angel looking at Jesus; he has a book and on it is written: "Search the Scriptures."

To the left another angel is gazing outside the icon; he is showing abook with the words: "Write in the book and send it to the churches." In the background, to the right and left, four columns are brightened by the light that comes from the Blessed Sacrament.

Around the altar are the apostles and evangelists: some are writing, others are praying, some have the sign of their martyrdom; some are looking at Jesus and Mary; some are standing, others are kneeling and others sitting. Paul has his right hand on his heart; in the left he is holding a sword and a closed book. Peter is in the middle, with his gaze lowered; with his raised hand he is pointing to Mary who carries Jesus; in his left hand he is holding the book and keys; his right foot is extended forward. The light of the Blessed Sacrament shines on their faces and clothing.

The icon does not represent the Cenacle but a council meeting. Mary, standing and active ("on the journey”), represents the Church, the pilgrim people.  She is showing us her Son, offering him to us to "read," as a "deaconess" who offers a book. Jesus with the scroll in his hand presents himself as the Truth, the Way of the Apostles, the Way of the Church.

Mary is standing before the altar to indicate the centrality of the Eucharist. To give Christ is the greatest act of worship. Mary represents the Church who gives Christ: as Word and sacrament. She is like a monstrance, where the Blessed Sacrament is mounted so that all can see. Her life itself is a monstrance in which one can read Christ, the wisdom of the Father. The altar recalls the liturgy, the worship of God in Christ, and the two tables: that of the Word and that of the Body of Christ. Our lives, as Mary's, are to be a liturgy of life, a work of the people for God, glorifying God in every aspect of life.

Mary enables us to understand the Word; she is the listening, discerning woman. To understand Christ we need to see him in the mystery of the Incarnation. Mary's motherhood reminds us that he came to us in the flesh, and he touches us in our flesh, in our bodies, healing us and making us whole in the power of his glorious, resurrected body. Mary is united to the mission of her Son-to bring all men and women into the light and warmth of God's goodness, mercy, and love.

Mary almost hides herself in order to more strongly indicate the presence of the Christ. She gives herself over 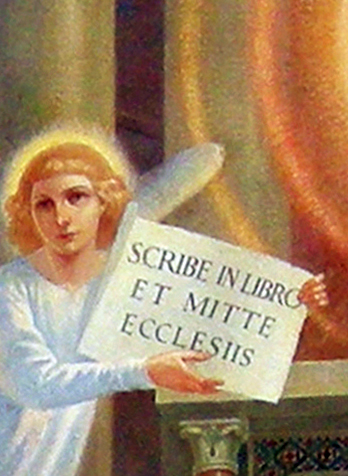 completely to him, giving without measure. Her genius is a particularly powerful one: the feminine genius. Her femininity, gentleness, and sweetness combine for a strength that can permit her to be incisive.

Mary's queenship is not a title of power but of service. She is to bear, sustain, and help us to live in charity. God the Father has entrusted the noblest service to her: to give Jesus to the world. She can help us become bearers of Jesus, teaching us to "put on" Christ in our mind, will, and heart so as to live and serve as true disciples. The angel with the writing: "Search the Scriptures," is turned toward Jesus and Mary, indicating that Jesus is the key for reading the Word. The other angel with the writing: "Write it in the book and send it to the churches," is looking outside of the icon, in the same direction as Jesus and Mary. The words are from chapter 5 of the Book of Revelation, and they mean: what you contemplate and see, write and send to the churches (to the seven churches in Revelation, therefore to all the churches). The apostles and evangelists, for their part, are intent on reading and writing.

Paul has a prominent position. Touching his heart, he reminds us that an apostle is called to take to heart all that Christ lived and spoke. Paul became another Christ; "imitate me as I imitate Christ," he told the members of the early Church. This is what God calls us to also—to be Christ for the men and women of our time. We are to be Christ's hands reaching out to people who thirst for ultimate meaning, for the Word that gives true wisdom, for life. Paul holds the sword and the book because he died giving his life up as a preacher of the Word. Peter is pointing upwards, motioning toward Jesus and Mary. He reminds us that there are heavenly realities after the struggle of life is over. Mary represents the Church, the virgin who listens, takes to heart, and seeks to show compassion for the whole People of God. Paulines are called to live vibrantly in the Church, walking with her in joy. With the Pauline Family there are some who write, others who remain in contemplation, preachers, laborers, audio technicians, designers, graphic artists, webmasters—all communicating Jesus Christ, Way, Truth, and Life.