100 YEARS AGO TODAY: A NEW PATHWAY OPENS FOR WOMEN IN THE CHURCH 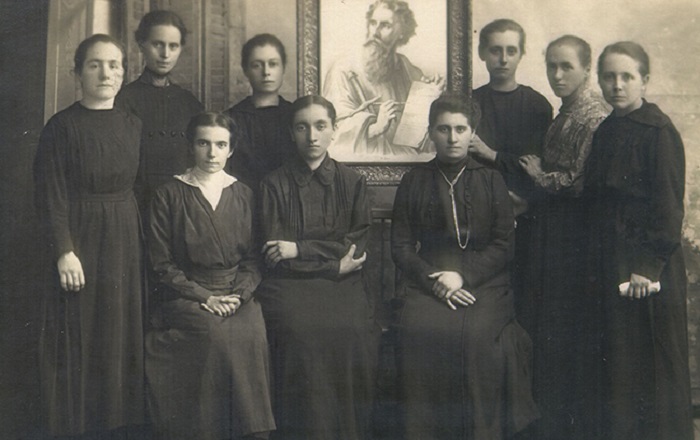 100 Years Ago Today: A New Pathway Opens for Women in the Church

“Nowadays it seems that almost anyone can get up and speak on any subject,” the young priest wrote. “Let us also prepare ourselves so we can also speak out. And since we are people of our own time, let us make sure that women too are prepared for the new era.”

Given the time and place, there was sure to be a widespread contradiction when Father James Alberione began inviting women to join in his communications mission. Although Alberione took care to avoid premature challenges, he did take up a strong position, even writing a book on the involvement of women in the holy mission of  the priesthood, saying “what could be said at the time,” he later confessed.

The book, begun in 1912, was entitled “Woman as Collaborator in Priestly Zeal”.  In it, Alberione suggests opening up the horizons of women’s contribution in parish life and offers a wide selection of detailed examples. But more specifically, the mission which the author wanted to see women engaged in was of an apostolic kind, beyond the family and even the parish: “The female apostolate is needed everywhere. It is not limited to charitable works and to improving the lot of working people. They must enlarge their field of operation to embrace the moral and religious healing of society.” The author hinted at suggests the sort of roles a woman might play both in Catholic publishing and in small scale distribution. But it goes on to assert that there is no aspect or function of the apostolate of the  printed word from which women should be excluded: “To begin with, a woman of suitable background can at least write…this possibility is particularly great if we speak of a woman consecrated to God, a Sister.”

For those with eyes to see, he had just tipped his hand, but he made no reference to his own project to avoid unnecessary challenges, though he did support those who were trying to free Catholics from a spirit of passive acquiescence: “Let us not be counted among those who have resigned themselves…We are not be afraid…Ours is the twentieth century, and it is in this century that we must live and work. We have to be people of the age, trying to understand its needs and to exert ourselves to meet them. In these days, it takes organization to produce results. Well then, let us organize righteousness; let us marshall men and women of goodwill. People are trying to organize a love of reading. So let us make sure that there is a supply of wholesome material to read.”

Much later, in a 1953 retreat conference for the Daughters of St. Paul, Fr. Alberione  said: “Go and preach according to your nature, according to what a woman, a Sister can do.  As most of pastoral theology reflects the experiences of men, so the Sisters have the beautiful mission of reflecting and communicating the spiritual experiences and insights of women and promote life to its fulness.”

It was towards the spring of 1915 when Father Alberione found an ideal place to establish his women’s organization. All he really needed now were the women. And what were they to train for? For the time being he offered inquisitive visitors no more than a rather evasive name. The sign on the premises of the former printing school for his seminarians read simply “Women’s Workshop” and it opened on 15 June 1915.

This was the birth of the Daughters of St. Paul, though for the moment they had no formal existence – not even a name. In the workshop at that time there was only Angela Maria Boffi, a woman of 29 who had been employed  as a secretary by a local wine shipper. The next task was to find more female recruits, and this was a problem. How could the spiritual director of a seminary open a women’s workshop, install a secretary from a winery there and call for other young women to join her? Alberione was not yet free to reveal that what he was setting in motion was intended to be a foundation of priests, religious brothers and sisters of a new kind, devoted to the press, publishing and whatever technology might be needed for evangelisation in the decades to come.

His female recruits certainly represented a completely new page, for there was no seminary to draw on: they had to be found in their own homes. This was not the typical path of women who entered the convents of established congregations by following well-defined procedures. Fr. Alberione was offering the possibility of becoming a different kind of nun in a different kind of world, guided by rules which had still to be written, performing a task that no one had yet undertaken, and complicated by the need, in the early years, to operate partly undercover.

So it was necessary to search out the first recruits one by one, looking not only for the usual qualities required for the religious life, but for the special courage needed to face a new kind of work. The first young women to accept the challenge  would have a fundamental influence on the future community, for they would set the example with which those who came later would identify.

As he pondered over this problem, Fr. Alberione paused on the name of a young woman  who had been mentioned to him. It seemed somehow familiar – Teresa Merlo. Her village, Castagnito, was quite close, only a couple of hours journey from Alba.

Having accepted Fr. Alberione’s proposal to teach a sewing to group of young girls as they filled a government contract for military uniforms,  Teresa remained in Alba. From the very beginning, the small group was guided towards the community life, their future vows and the new mission field of the printed word. The outward appearances of the  project of  Fr. Alberione were still disguised to discourage unwelcome curiosity. The advertisements in the Gazzetta d’Alba  spoke of the school in Via Accademia as teaching sewing,  tailoring, and embroidery. Fr. Alberione was always careful  to avoid anything more descriptive, though the announcements also made it known that good books could be found at the same address.

This project with the “daughters” (figlie: the local dialect’s term for young women or girls) did not enjoy a smooth start. A growing number of diocesan priests were worried that Fr. Alberione was beginning to cause scandal. They accused him of  undermining the seminary by enticing its students  into a risky project which involved young women who had been taken from their families or diverted from religious orders where they would have been better employed. And it must be acknowledged that many of his recruits came from parishes where they were already doing excellent work -  young women like Teresa Merlo, the most effective catechist in the parish of Father Pistone, who never quite forgave Alberione for taking her away. The bishop simply watched and held his peace, hoping that these ideas really were of God, though he may have begun to worry when letters started asking him to bring the experiment to an end. As if this were not enough, others tried to involve the civil authorities: all this attention spent on the small, almost invisible achievements of two small groups of young people organized by Fr. Alberione! It is perhaps to be marveled at that the two small groups of seminarians and “daughters” managed to persevere in the face of such opposition. Teresa herself was later to write, “At times, we were so discouraged that we hardly knew which way to turn.”

The attacks against Fr. Alberione’s project, however much they provoked  his fiery temperament, never upset the good relations he maintained  with his young people. “There are only two things which bothered me,” he told his group during a meditation, “and that is that I  am not yet good enough, and that you are not yet holy enough. These are my only anxieties. In the end, nothing else matters.”

This was Fr. Alberione’s way of forming his young people into apostles who must be ready to set off  in any direction without help or support and to face opposition even from fellow Catholics. The training of his young people was intended to have a strong spiritual dimension, a deep spirit of prayer involving retreats, daily meditation, and visits to the Blessed Sacrament.

On July 22, 1922,  Fr. Alberione assembled the adult members of the women’s group for their perpetual private vows. Teresa and eight other young women committed the whole of their lives to a new apostolate in these words: “Binding ourselves together with the bonds of  chastity, obedience, poverty and loyalty to the Pope, we undertake to devote the whole of our lives to the good press and to live the life of our Divine Master, seeing with the eyes of  Mary Queen of Apostles, and inspired by the guidance of the Apostle Paul.”

The fourth vow of loyalty to the Pope, adopted by these first Sisters on their own initiative, was Fr. Alberione’s way of spelling the new and singular character of the new congregation, which he called Romanita’,  placing the Daughters of St Paul visibly at the service of the Church and its head.

And so, born in hiding on 15 June 1915 as a “women’s workshop”, the Daughters of St Paul established itself as a religious community. Today, in over 50 nations, the Daughters of St Paul continue their unique ministry of evangelisation through all available forms of communication, as convinced in their time as those first nine women that “no greater wealth can be given our poor, proud world than Jesus Christ.”