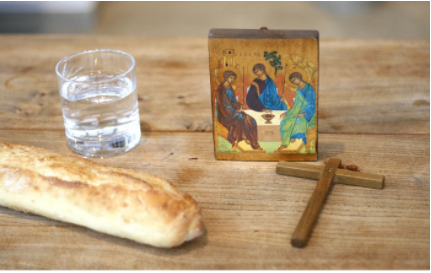 Nicholas King SJ, in his translation of the Old Testament, entitles today’s extract from the Book of Exodus, “The Awe-Inspiring Experience of the Ten Words”.  These Commandments, or literally, “Ten Words”, are unlike any of the other compilations of Mosaic Law in the Pentateuch (the first five books of the Old Testament). This is the basis of all the other specific laws worked out as the People of Israel later became settled in the Promised Land. These Laws are all applicable to several contexts. As Nick King writes,

It is important not to get obsessed with their apparent negativity. What is at stake here is the loving relationship that God is offering, and the moral landmark that God offers as a basis for living out that relationship.

In later versions of these Laws, they are prefaced with solemn declarations, rather like other formal decrees of covenants between rulers and their subjects in the Ancient Near East. This is Israel’s fundamental covenant with God.

This extract from the opening chapter of this first letter to the Christians in Corinth goes right to the heart both of the Christian message and Paul’s fundamental preaching of it. Counter-intuitive to all conventional religion and reason, the “crucified Christ” is the key to salvation. It may be an obstacle or seem like madness, but to the eyes of faith Paul’s assertion rings true, “God’s foolishness is wiser than human wisdom”. Here we have a reminder, once again, of what lies at the goal of our Lenten disciplines: the celebration of the central acts of the Christian faith in Jesus’ suffering, death and resurrection. These matters are beyond the powers of ordinary reasoning. They lie in the realm of faith: trust in God’s promises.

Apart from the Gospel of the Passion on Palm Sunday, today and for the rest of Lent, and for much of Easter, our Gospel Readings come from St John’s reflections on Jesus’ ministry which, more than any other Gospel, can be seen to be later reflections in the light of the Risen Christ. This is made explicit in today’s extract, “When Jesus rose from the dead, his disciples remembered that he had said this, and they believed the scripture and the words he had said.”

Where the other Gospels only refer to one journey of the adult Jesus to Jerusalem during his final week before the Crucifixion, St John’s recounts three such visits. We have no means of knowing which the correct version is but what is clear is that this Cleansing of the Temple comes right at the beginning of John’s account of the ministry and only right at the end in the other Gospels, and so it takes on a different significance. In this Gospel it acts as a kind of manifesto of Jesus’ whole ministry: the Jewish religion had gone hopelessly astray; the money raised by the Temple had become more important than the observance of the Covenant that it was supposed to support. Jesus has come to bring about a radically different approach to relationships with God, no less than through his own body: the new Temple. This is quite some claim and we can understand why it was that it was only after the Resurrection that the disciples came to understand fully what Jesus said and did.