FEAST OF THE BODY AND BLOOD OF CHRIST 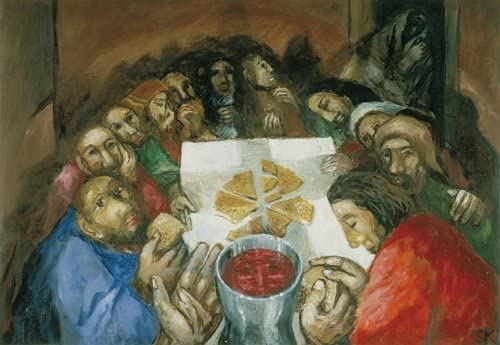 Feast of the Body and Blood of Christ

On a day when we commemorate the institution of the New Covenant in Jesus’ Death and Resurrection, symbolised in the gift of the Eucharist, this Reading takes us back to the Old Covenant and the moment in which the People of Israel dedicate themselves to following the laws and decrees that Moses has just finished reading out to them. That earlier covenant is sealed in the blood of animals offered in sacrifice… the new one is sealed in the blood of Jesus Christ. A holocaust is a complete gift to God, with nothing held back for the use of the one offering the sacrifice. This is in contrast with sacrifices in which only part of whatever is sacrificed is offered to God in thanksgiving, while most is kept for the use of those who give thanks for the food they receive.

A key theme for the author of this Letter is that Jesus’ death on the Cross has brought to a completion (an end) all the old sacrifices that used to be offered in the Temple in Jerusalem. No longer is animal blood the source of forgiveness (on the Day of Atonement to which this Reading is referring), now it is “his own blood” that has “won an eternal redemption for us”. The Day of Atonement had to be celebrated each year, but this is now surpassed with the one, single sacrifice of Jesus. This “new covenant” fulfils everything that the old one failed to do because of the infidelity of the people, because the new does not depend on the worthiness of those who offer sacrifice, it depends solely on Christ who is “the perfect sacrifice”.

This extract is part of the full Passion Narrative that was read as the main Gospel on Palm Sunday. In the time schedule of the first three Gospels, Jesus gathers with his disciples to celebrate the Passover Meal on the night of his arrest. The Passover commemorates the liberation of the People of Israel from slavery in Egypt and is the most important feast in the Jewish Calendar.

As the meal begins Jesus is at table with the Twelve Apostles. Only one of them will be with him the following day when he is dying on the Cross. One will betray him to the authorities, another, Peter, the “leader” of the Twelve, will deny that he even knew Jesus and he will join the other nine who all desert their Lord at the hour of his greatest need. Jesus is about to offer himself as the new lamb of sacrifice liberating all people from their slavery to sin, and he gives his disciples a new commemorative meal in the Eucharist which he establishes, even though most of them will shortly abandon him.